South Africa has the saltiest children's chicken burger in the world Children are being served worryingly high amounts of salt by popular fast food chains, according to a new 2015 international survey carried out by World Action on Salt and Health (WASH) and supported by the Heart and Stroke Foundation South Africa (HSFSA).

"That’s more than a child aged 4-6 years old should be eating in one sitting, with some meals containing as much salt as 10 packets of ready salted crisps," it stated.

"The most worrying finding from a South African perspective is that we feature amongst the top 10 countries for saltiest children’s fast food meals from the 37 countries surveyed globally.

“The more salt you eat as a child, the more likely you are to have serious health issues in later life,” said WASH Chairperson Professor Graham MacGregor.

“This can include high blood pressure, increased risk of stroke, heart disease, osteoporosis and kidney disease. That is why it is vitally important that children do not get used to the taste of salt.”

The survey results are extremely relevant in South Africa where fast food intake is on the rise, with an estimated 1 in 3 adolescents consuming take away meals 3 times a week.

It is urging all food manufacturers to universally reduce the salt content of their products, to help achieve the global maximum target of 5g salt per adult per day  – with children’s meals taking priority.

Read: Too little and too much salt – both are dangerous

The HSFSA wants to emphasise the importance of this call to action among all South African fast food chains, both international and local.

“With South Africans having one of the highest rates of high blood pressure worldwide and 1 in 10 children already suffering from high blood pressure, we simply cannot afford to allow such high levels of salt in popular children’s meals”, said HSFSA Science and Programme Development Manager Christelle Crickmore.

Of the 387 children’s foods choices WASH surveyed only 233 had complete nutritional information to allow comparison of salt contents.

“Lack of nutrition information makes it impossible for parents who are trying to do their very best to make a healthy choice for their children,”  said Stephanie Tucker, a nutritionist at WASH.

“Therefore all fast-food restaurants should provide nutrition information, so that people can know exactly what is in their food.”

The survey not only highlighted the excessive amounts of salt in meals, but also the huge variation in salt content of the same meals sold in different countries. 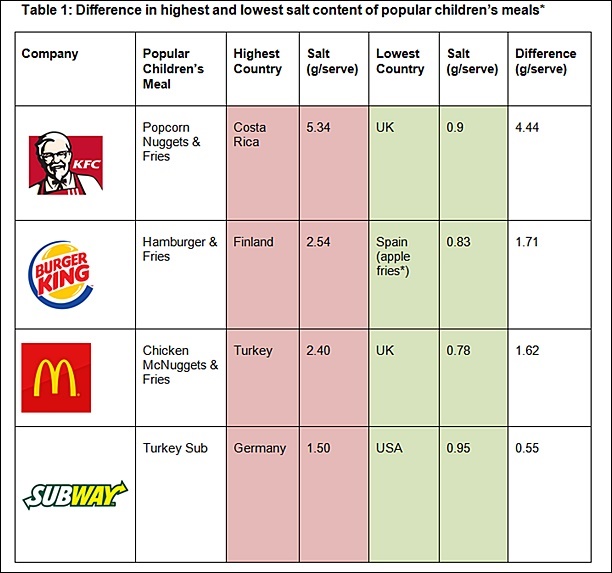 “The fact that these fast food chains are able to produce less salty children’s meals in some countries means they can do the same in all countries, and should immediately," said WASH Public Health Nutritionist and International Programme Lead Clare Farrand.

"All children, regardless of where they are from, should be able to enjoy the occasional meal out, as a treat, without putting their health at risk," she added.

To help regulate salt content in foods, the Minister of Health, Aaron Motsoaledi, proposed legislation in 2012 to cut the sodium content of certain foods by 30 June 2016.

Regulation No. R. 214 of the Foodstuffs, Cosmetics & Disinfectants Act, 1972 (Act 64 of 1972) which was published in March 2013, is one of the first steps undertaken by the government to reduce the sodium intake of the South African population.

High-salt diets can cause heart woes in diabetics

We live in a world where facts and fiction get blurred
In times of uncertainty you need journalism you can trust. For only R75 per month, you have access to a world of in-depth analyses, investigative journalism, top opinions and a range of features. Journalism strengthens democracy. Invest in the future today.
Subscribe to News24
Related Links
Is bread killing South Africans?
South Africans consume too much salt
Next on Health24
Does your life exhaust you?