The journey of a white sangoma

“I was doing really really well at work, establishing myself as a great designer. I think I was very passionate and possible overly involved in being a designer. My ego - that was all I was about.”

Suddenly Dorje found her life collapsing in front of her. In the space of six months she was retrenched, her boyfriend left her for someone else, and to top it all off she became desperately ill with hepatitis. She felt that she was all alone and in a house “75 steps up in the middle of nowhere in Higgovale”. It was in this period of Dorje’s life that she started having frightening dreams. She said she use to wake up at three every morning with her body shaking having dreamed of snakes in her bed, or a monk and leopards sitting at the foot of her bed. She said she experienced visions of tunnels, dead faces and bodies in blood and water. 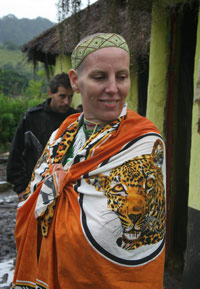 “I thought I was allergic to something. My body would be shaking, I would be sweating. “I kept thinking: ‘I’m dying’.” Dorje said that she got desperate and terrified. She started to believe that she was having a nervous breakdown. She phoned a psychologist who told her she could not help.  Dorje went to see her anyway.

She started to speak to people about her experiences to try come up with a reasonable explanation of what she was going through. She saw astrologists, did holotropic breathing and experimented with yoga postures. “I became really inspired and started doing creative, artistic things. I felt an incredible sense of being connected.”

Dorje attended an art exhibition where she started to talk to a Twasa (trainee sangoma) about the dreams he was experiencing. Dorje noticed the connection and soon found herself going for a reading with a sangoma. “I thought to myself that I had nothing to lose. To return to normality and have a good night's sleep were my primary objectives.” The sangoma told her that she had a calling to train as a sangoma and that she should go to the Transkei. “I was desperate enough to just go. So I went.” Her first visit to the Transkei was two weeks long. During this fortnight, among other things,  she was taken through an initiation ceremony.

“It was an amazing adventure. To be taken into a culture in a way I could never have even begun to dream or anticipate.”  Dorje described her entire Twasa experience as entering into “a very simple military training regime”.

To get to her sangoma graduation, Dorje had to move back and forth between Cape Town and the Transkei for six years. Before going to the Transkei for the first time, Dorje started her own graphic design company, Snoek Design.

She also entered into a new relationship with the love of her life and her future husband, whom she met during a leadership course in Cape Town.  “It was because I was going through this that my husband came into my life.” During her training Dorje was given the Xhosa name Nobuyile, which is translated as ‘she who has returned’. During the first section of her training Dorje had to give up her real name, take a vow of silence, dress in white, kill three chickens (which her teachers did for her) and wash herself in the blood and eat the chicken’s insides. The chicken’s feathers were placed on her head and remained there until she was ready for her goat. She was given two sticks that she was required to keep with her at all times. Ironically, when she entered the Transkei she was a vegetarian.

Asking for her goat

Every night before Nobuyile went to sleep she had to beat up a mixture of dream medicine and ask for her goat.

Dreams play a very important role in a sangoma’s life because they believe that when they dream, it is the ancestors talking to them. This ‘direct line’ gives a sangoma the knowledge he or she needs in order to go about his or her daily tasks.

Once Nobuyile received her goat in her dream, her teachers would know that she was ready for the next step. Nobuyile said her dream took place near a cliff with running water and the goat she dreamed of was a white male. Once she had had this dream, her teachers and her went on a search for the cliff, as this was where she was to have her ceremony. “The goat symbolises a stage of maturity and commitment in your life.”

At the ceremony, Nobuyile’s white dress code was changed to red and her sticks were replaced with weapons she had dreamt of. She had to explain where her weapons had been hidden and how they were placed. She said she did this by listening to her instinct. “Your body starts to work before your mind. If your hand moves in a direction that is the direction you go.” 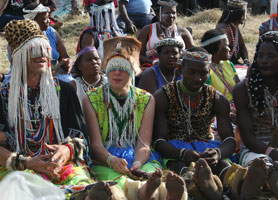 After this ceremony, Nobuyile’s task was to dream about her cow, which would be at her graduation. Six weeks before her graduation Nobuyile  went to the Transkei to prepare. She said that the event was open to everyone and so she had to do lots of preparation. “Because I was white I think many community members came just to see if I would go through with it,” she explained.

Nobuyile, with the help of the community and the chief's wife, Mabala, had to make 1000 litres of umqombothi beer for all the expected guests and chop a pile of wood that would be sufficient for the fire. She also had to bead her outfit that she would wear at graduation. She said that at ceremonies like these  the sangomas deal with the community and any problems individuals might be experiencing. Nobuyile’s father went to the Transkei to be at her graduation and her husband, George Petousis, brought the cow that was to be used during the event.

Terry Westby-Nunn, a movie director, heard about Nobuyile’s graduation and decided to go. She took a small video camera with her and when everything was over she interviewed Nobuyile and created the film White people also dream: The shamanic journey of a sangoma. Nobuyile said that having Westby-Nunn there was amazing. “The people you least expect to get involved become a part the ceremony.”

“What I have learnt from all of this is that you are not a person on your own, you are a function of your community.” “I am quite curious to see where to from here. How do I bring this [being a sangoma] into our community?”

We live in a world where facts and fiction get blurred
In times of uncertainty you need journalism you can trust. For only R75 per month, you have access to a world of in-depth analyses, investigative journalism, top opinions and a range of features. Journalism strengthens democracy. Invest in the future today.
Subscribe to News24
Next on Health24
Add a sweet surprise to your veggie juice: chocolate