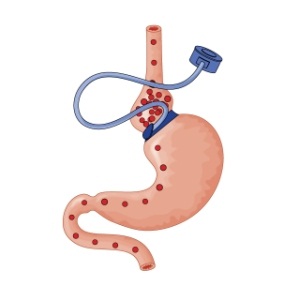 A study of real-world results among thousands of patients finds that gastric bypass surgery produces far greater weight loss than an alternative adjustable gastric band, but both procedures have complications.

His study found, though, that patients who got the adjustable band were far more likely to have surgeries years later to address problems or to remove the band entirely.

Read: What is gastric bypass surgery?

Arterburn and his colleagues compared outcomes for the two most common weight loss surgeries in the past decade. One, laparoscopic Roux-en-Y gastric bypass (RYGB), makes the stomach into a small pouch and connects it directly to the middle portion of the small intestine, and the other, laparoscopic adjustable gastric banding, or "lap band" surgery, involves placing a band around the top part of the stomach to create a similar small stomach pouch.

Both make patients feel fuller with less food. Doctors can adjust the lap-band after surgery to make food pass more quickly or slowly through the stomach.

The researchers analysed data on 7 457 patients from a network of 10 healthcare systems in the United States who underwent either of the two surgeries from 2005 through 2009 and were followed-up through 2010. Almost 6 000 of the patients received gastric bypass surgery.

Those who had lap-band surgery lost an average maximum of 8 points on the body mass index (BMI) scale, a measure of weight relative to height. A healthy BMI is between 18.5 and 25, and BMIs over 30 are considered obese. Patients are generally eligible for bariatric surgery if they have a BMI of at least 35.

Patients who had gastric bypass surgery lowered their BMI by an average maximum of 14.8 points.

Over the course of the study, patients in both groups experienced complications.

Almost 14 percent of the lap-band patients needed surgery again during follow-up, while only 5.5 percent of the gastric bypass group needed additional surgeries, according to the results in JAMA Surgery.

Beginning of the end

"With the band, while you have a little risk, you have less weight loss over all and in the long run, banding patients have more re-operations or additional procedures," Arterburn said.

Today, lap-band surgery has dropped off in popularity due to long-term complications, erosion and poor weight-loss results, said Dr. Justin B. Dimick, chief of minimally invasive surgery at the University of Michigan in Ann Arbor.

Dimick was not involved in the study but co-wrote an editorial accompanying it entitled "The Beginning of the End for Laparoscopic Banding."

"Many people told me when they saw this paper that this isn't the beginning of the end, it's the end of the end," Dimick told Reuters Health. "A lot of surgeons take out more bands than they put in," he said.

Both gastric bypass and the lap band have been surpassed by gastric sleeve surgery, the most common bariatric procedure today, in which much of the stomach is removed and the remainder is stapled into a small sleeve, Dimick said.

"A lot of the patients who used to get bands are getting sleeve gastrectomy," he said.

A number of challenges

The weight loss results and complication risks for sleeve gastrectomy fall somewhere between the lap-band and gastric bypass, Arterburn said.

Arterburn believes lap-band surgery could still be the right choice for certain patients.

"For some patients who want a low risk, reversible procedure and who don't need to lose quite as much weight, they might stand to benefit and do just fine with a band procedure," he said.

Successful lap-band surgery requires good long-term follow up, he noted. Some surgical centres that do the band very well are going to keep offering it, he said.

"There are a number of challenges for patient and surgeons with the band but I don't think it's going to go away completely," Arterburn said. "I think it really boils down to what a well informed patient decides the right procedure is for them."

We live in a world where facts and fiction get blurred
In times of uncertainty you need journalism you can trust. For 14 free days, you can have access to a world of in-depth analyses, investigative journalism, top opinions and a range of features. Journalism strengthens democracy. Invest in the future today. Thereafter you will be billed R75 per month. You can cancel anytime and if you cancel within 14 days you won't be billed.
Subscribe to News24
Next on Health24
The next five years: 3 likely pandemic scenarios, outlined by a panel of 20 experts