On the heels of a South African Human Commission announcement that a national inquriy will be held on the state of emergency medical services (EMS), another man’s death has been blamed on ambulance shortages – this time in Limpopo

Read: Left for dead - the shocking state of ambulances

After being hit by a vehicle, 47-year-old David Mashaba lay bleeding out for more than three hours before an ambulance arrived at his village of Ha-Mashau about 40 km east of Louis Trichardt, according to the Democratic Alliance's ward representative Jonas Mugovhani who was called to the scene by Mashaba’s family.

“By the time the ambulance arrived, he had lost too much blood and died,” Mugovhani said. “I was born and bred here but I can assure you that I have never seen an ambulance at our local clinic.”

When villagers fall ill, their lives may depend on their ability to pool money to hire private cars to take them to the nearest health facilities in the absence of emergency medical services, Mugovhani said.

A recent South African Human Rights Commission hearing into Eastern Cape EMS found that a shortage of vehicles and staff, as well as poor roads and budgeting mean that some in the Eastern Cape have never seen an ambulance in their lives. For others, it has meant having to watch family members die before their eyes as some residents testified that they waited up five days for an ambulance. 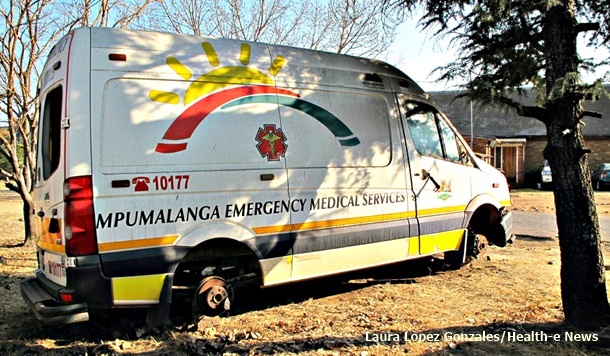 The Gauteng and Mpumalanga departments of health have also recently admitted to ambulances shortages.

The South African Human Rights Commission announced that it plans to launch a national inquiry into the state of EMS earlier this month.

The ratio of ambulances to patients in Limpopo remains – like many provinces – far above the national target of one emergency vehicle per every 10 000 people. According to the Limpopo Department of Health’s latest annual report, the province had one emergency vehicle for every 47 290 residents.

Previous annual reports have attributed the province’s inability to procure more ambulances due to financial constraints.

This year, the Limpopo Department of Health promised to prioritise the purchase of new ambulances and 60 were unveiled at a ceremony at Sekororo Hospital outside Polokwane on 25 August.

Another 40 ambulances were expected to be delivered by the end of the financial year, according to a statement by Limpopo Premier Chupu Stanley Mathabatha.

As in the Eastern Cape, the vast distances between communities as well as poor rural roads put pressure on the province’s EMS fleet, said Limpopo Spokesperson Phuti Seloba during the August handover.

“It has become normal for residents to wait for more than three hours for an ambulance and in some cases the ambulance does not even arrive at all,” he said.

The Limpopo Department of Health did not respond to requests for comment. – Health-e News.

We live in a world where facts and fiction get blurred
In times of uncertainty you need journalism you can trust. For only R75 per month, you have access to a world of in-depth analyses, investigative journalism, top opinions and a range of features. Journalism strengthens democracy. Invest in the future today.
Subscribe to News24
Related Links
Left for dead: The shocking state of ambulances
Fixing the South African public health sector
Animal activist acts as ambulance in Soweto
Next on Health24
Questions over implementation of SA’s new infection control plan