Most people can’t start the day without that first cup of coffee. You need that kick-start. How else will you survive all the meetings, your boss breathing down your neck and the never-ending deadlines?

While one or two cups a day is generally considered healthy, research from Health24 has shown that too much caffeine can lead to or exacerbate heart palpitations, anxiety and sleeplessness.

To make matters worse, many studies have demonstrated the addictive potential of caffeine – and experts are calling for increased awareness and stricter regulations.

But just how difficult is it to completely give up your coffee – especially if you are a self-confessed coffeeholic?

Meet James de Villiers, a News24 intern, who drank on average seven cups of coffee per day and said he couldn't survive without this crutch.

“I was the ultimatele cliché: the dazed millennial whose brain was a clouded mess until I got my first, or even second cup of coffee in the morning,” De Villiers says.

“My family knew not to talk to me about anything until the caffeine kicked in.”

So we decided to challenge him to give up caffeine for two weeks and take note of all the changes he experienced. Luckily he doesn’t consume other sources of caffeine such as energy drinks, so the battle was mainly to cut out the coffee.

Not a pleasant time

Dietitian Ria Catsicas was right beside him during the journey, giving advice on what he could expect during the process.

“He will most likely go through a withdrawal period,” Catsicas said before De Villiers took on the challenge. “During this period, he might get headaches and be very irritable. He will be craving coffee and this will not be a pleasant time.”

"The amount of caffeine required to produce adverse effects varies from person to person, depending on weight, sex, height and differences in susceptibility. But six or seven cups of coffee per day is quite a lot..."

We checked in with De Villiers' progress at various stages of the coffee challenge.

"The first four days I stared endlessly at my computer, struggling to concentrate.”

Watch De Villiers being optimistic about the first day of the challenge:

“I’d be writing an article and having to continually remind myself what I was busy with – I was death warmed up. I just wanted to lie in bed and feel sorry for myself.”

Luckily the feeling did not last, and soon De Villiers was back to normal. "I think the toughest thing was to find an alternative to coffee – my water consumption nearly doubled."

De Villiers had to record his sleep quality and quantity on nine different occasions before and during the coffee challenge. He had to rate the quality on a scale of 10 (0 being very poor and 10 excellent) and take note of the numbers of hours he slept. His average "quality score" before the challenge was 6, with one night scoring only 1. After the challenge his average was 7, with no night less than 4.

He also needed less sleep during the challenge. His average went from 6.5 down to 5.7 hours per night. His sleep pattern was also more evenly distributed, with fewer extremes. Catsicas predicted that he might sleep better, and the quality of his sleep did indeed improve. De Villiers' energy levels were assessed on nine different days. He was required to score his own energy levels on a scale of 1–10. His levels during the challenge rose slightly and he had more days above the threshold line of 5. "The first 48 hours were the worst. The headaches were impossible – and I kept asking myself why I was doing this. ‘James, one cup of coffee will make all the headaches go away,’ was one of the thoughts I needed to keep battling." De Villiers' mood dropped slightly during the challenge, especially during the withdrawal period. "I honestly couldn’t do life without coffee; just the smell of coffee gave me cravings." We tracked De Villiers' bowel movements on nine different days, both in terms of how many times he had to release and the quality of his stool.

"I kind of have a poor digestive system and constantly going to the bathroom has always been a part of my life." During the challenge he released stool less often, with fewer days being above the mid-point of three times.

The quality of his bowel movements was scored on a scale of one to three, with three being very good. It is clear that although he went to be bathroom less frequently, the quality of his stool was undesirable. This is on point with what Catsicas predicted: "Caffeine facilitates bowel movements and he might find (depending on his diet and susceptibility) that he is more constipated." 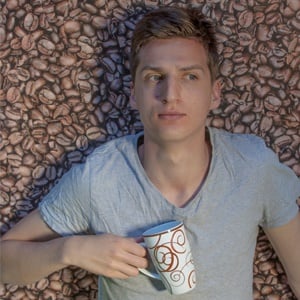 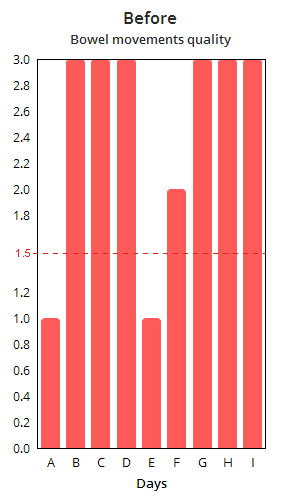 "Once I got through the first three days, I felt like I could do this forever, but as the 14-day mark inched closer, the anticipation grew of having my first cup of coffee again.

"Coffee was my routine; while my colleagues used to smoke, I’d grab a cup of coffee for a break, and now I needed to find something else to do. It was difficult at first because I basically thought about coffee every time I had a break – but Rooibos tea soon became my best friend.

“I think the challenge was worth it. Clearly there’s something wrong with consuming seven cups of coffee and I realised how coffee affected my quality of sleep. I used to blame struggling to sleep on my overactive brain, but now I realise it was caffeine that kept this night owl going.

"I got to know myself better. I changed my routines, cut out coffee in the afternoons and simply tried to live a healthier life. Coffee became a crutch to make up for other things in my life which were out of balance. It was an eye-opener to realise that I probably needed to change my sleeping patterns, the time I spent relaxing, etc.

If you are planning to quit drinking coffee, tell everyone around you. You need people to keep you accountable and hold you back you if you’re thinking of taking a walk to the coffee shop. And at a narcissistic level, it’s kind of encouraging to be able to brag to your colleagues that you survived the worst – who doesn’t like a little bit of sympathy?

“Obviously coffee is liquid joy. But now I'm drinking less, maximum four a day, compared to my previous seven a day average. But weirdly, after I stopped drinking coffee and went back to it, I couldn’t stand weak coffee anymore. I now need an extra shot in my flat white, otherwise I just don’t taste it.”

“After I stopped drinking coffee, I started going to bed at the same time every night. There wasn’t anything that pushed me to go on past my bed time anymore, so now, when the clock strikes 10, my eyelids battle to stay open and I can't wait to embrace my duvet.”

We live in a world where facts and fiction get blurred
In times of uncertainty you need journalism you can trust. For only R75 per month, you have access to a world of in-depth analyses, investigative journalism, top opinions and a range of features. Journalism strengthens democracy. Invest in the future today.
Subscribe to News24
Next on Health24
Some form of long-term symptom lingers in one in 10 who had mild Covid-19, new study finds