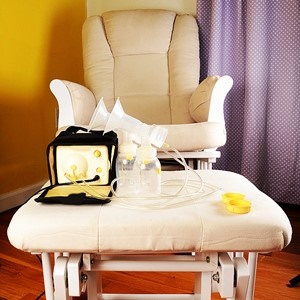 Does your workplace accommodate working moms who need to express breast milk?

For a baby to not only survive but to thrive, mothers should breastfeed for the first 1 000 days of a baby's life.

Yet thousands of mothers aren't supported by their families and employers when they want to breastfeed.

Mother and journalist Thabile Mbhele knew she wanted to breastfeed her baby exclusively for six months. But some of her family members thought it would be impossible.

"I had so many issues with my mother who said I could never breastfeed for six months, the child would never be full and I need to feed the child anything and everything at least after three months.

"But I was determined and I exclusively breastfed for six months," she said. Mbhele took measures to ensure she would be able to breastfeed her child even after she went back to work.

"I planned because I knew that when I got back to work, I would have to go out to do stories. I had stockpiled milk before I went back to work. I bought a cooler box to store breast milk I had expressed at work."

This was frowned upon by some of her colleagues who did not understand why she was putting so much effort into expressing breast milk while at work.

She also felt that she needed to be able to express milk without feeling like she was breaking the rules.

Request within the law

"I had male editors who said I should write an email requesting a room to express. They informed top management and we were allocated a room that had things like a bed, table, fridge and other things we needed to make the room 'express friendly'.

"The bosses were understanding when we stated that our request was within the law."

Ann Behr from the Directorate of Child, Youth and School Health at the Department of Health was one of four panellists at a roundtable discussion on supporting breastfeeding in the workplace.

She said the lack of supportive environments were among barriers that prevented women from breastfeeding.

"Women stop breastfeeding because of work. They also do not know their rights when it comes to breastfeeding in the workplace. Employers are also not aware that breastfeeding breaks – twice a day for 30 minutes – are legal.

Behr said the workplace toolkit, a guide for employers, is expected to help South Africa reach the World Health Organization (WHO) target of infants who are exclusively breastfed, which is currently at 32%, to be increased to 50% by 2025.

"To reach this target, we need a supportive and conducive environment. We need education and counselling for mothers because breastfeeding needs a lot of counselling and education despite it being seen as a natural thing to do."

The panellists agreed that breastfeeding should be treated as a norm in order to encourage women, particularly those who are working, to continue breastfeeding beyond the recommended six months of exclusive breastfeeding.

They also believe that involving men in breastfeeding education will strengthen different initiatives aimed at promoting breastfeeding and nutrition for babies.

We live in a world where facts and fiction get blurred
In times of uncertainty you need journalism you can trust. For 14 free days, you can have access to a world of in-depth analyses, investigative journalism, top opinions and a range of features. Journalism strengthens democracy. Invest in the future today. Thereafter you will be billed R75 per month. You can cancel anytime and if you cancel within 14 days you won't be billed.
Subscribe to News24
Related Links
Pumped breast milk falls short of breastfed version
Milk directly from the breast is best for baby's weight
Breast milk has biggest benefit for preemies' brains: study
Next on Health24
Breastfeeding isn't just good for the baby – it may help a mom's heart