It's not easy to pinpoint the exact origins of Halloween, but people who study these things generally agree that it has something to do with the Celtic and Briton festivals, Samuin and Calan Gaeaf. These festivals were held to celebrate and mark the end of the lighter half of the year (spring and summer), and the start of the darker half (autumn and winter). 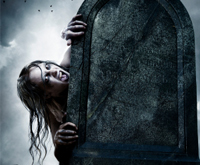 The spirit and ghoul aspect of the festival was due to the belief that the border between this world and what they termed the Otherworld became thin at this time of year, and the spirits of the dead could cross over the bridge of souls to visit.

The Celts believed that boundaries and thresholds, in both space and time, were very important.. Churchyard cemeteries to this day as are hemmed in by ditches, stone walls or Yew hedges, just as were prehistoric burial mounds. These boundaries were thought to protect the dead from the living, and vice versa.  The Celts believed that the mounds of the dead opened up on Samhain, and that humans could be tricked into passing over to the Otherworld with no way of getting back.

The Celts thought that physical locations, like seasons, had to have their boundaries. Spaces they considered as “outside of time”, or the Otherworld, can be demonstrated by such traditions of burying unbaptised children in boundary fence lines—a place that was not really “of this world”.

Food and gifts would be left to placate the dead on this night, and in some cultures of the region, young men would wear masks, paint their faces or dress up to fool the spirits into believing that they were roaming spirits too, and to protect themselves from being tricked. The festival does resemble the Mexican Day of the Dead (Dia del los Muertos).

Later, as the influence of Christianity spread into Celtic and Briton territories, the name of this holiday was changed to All-hallows Eve on 31 October and the 1st of November became All Saints' Day. It wasn't long before All-hallows Eve simply became Halloween. In the southern hemisphere, purists should really only celebrate Halloween during mid-winter, but it has changed into a fun festival that is held at the same time worldwide.

It's likely that the tradition of "trick-or-treating" dates back to All Souls' Day parades in England when the poor would beg for food. More prosperous citizens would give them pastries called "soul cakes" in return for a promise that they would pray for the donor's dead relatives. The church encouraged this practice as it replaced the custom of leaving out food and drink for roaming spirits.

Similar practices for the souls of the dead were found as far south as Italy. Shakespeare mentions the practice of 'souling' in his comedy The Two Gentelmen of Verona (1593), when Speed accuses his master of "puling ([whimpering or whining) like a beggar at Hallowmas."

What Halloween means in SA

Since South Africa came to freedom in 1994, and both our physical and mental borders were opened, South Africans have happily entered into Halloween festivities. While we do not have the depth of tradition experienced by the US and UK, children are delighted to disguise themselves in fancy dress, TV programming becomes a succession of fright-nights, and there is a very good excuse to hold a party. Whether you're going trick-or-treating with your kids around the neighbourhood, or pondering whether you really can go dressed as Lady GaGa in a meat-bikini – have a good and safe Halloween.