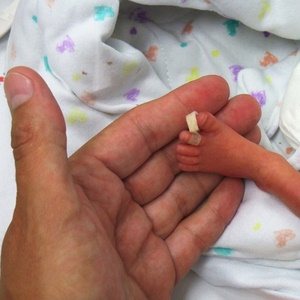 Amillia Taylor astounded doctors when she was delivered at 21 weeks and six days.

A premature birth is a birth that takes place three weeks or more before the baby is due. This means that any baby delivered before 37 weeks of gestation can be considered premature.

Premature births are risky and often hold dangers for the baby. If a baby is a couple of weeks premature, there are often few to no consequences. But the earlier the birth takes place, the more likely the risk of birth defects and the need for life support.

In 2006, a little girl named Amillia Taylor defied all odds. She shouldn’t be alive today. She was born in Miami, USA, at only 21 weeks and six days, weighing 284g and 24cm tall. According to the American Academy of Pediatrics, babies are only considered “viable” at 23 weeks. This meant the doctors had no legal obligation to try and resuscitate her, and that she would have been left to die if it weren’t for a little white lie.

The Guardian reported that the doctors involved in Amillia’s case were preparing to break the news of the baby’s death to her parents several times, as this case was like nothing they'd ever seen before.

It wasn’t an easy pregnancy. Amillia’s mother, Sonja, experienced cervical abnormalities and infections during the pregnancy. At 19 weeks, she started to experience labour and the doctors couldn’t delay the birth. Amillia wouldn’t have survived if her desperate mother hadn't deceived the doctors about how far along she actually was – the doctors believed Amillia was already 23 weeks. Yet, the tiny girl was able to breathe on her own, and even attempted to cry.

The lie that saved Amillia’s life

The Daily Mail UK reported that when paediatricians scanned the unborn baby, Sonja made a decision to lie about the length of her pregnancy, believing that her daughter would have a better chance if the doctors believed the pregnancy was 24 weeks along.

She was worried that the doctors would not even try to resuscitate a baby younger than 24 weeks. From that moment on, the doctors thought Sonja was two weeks further than she really was. At 21 weeks and six days, Sonja’s infection started worsening. The doctors, who at that time believed that she was 23 weeks and six days along, decided that they needed to act quickly. “Would you save my baby’s life if I gave birth now?” Sonja asked. The doctors said yes.

According to Daily Mail UK, Amillia’s skin was almost translucent and her one eye still fused shut when she was delivered via a Caesarean. Amillia was so tiny that doctors had to search the womb during the C-section.

Yet, her mouth opened and she gave her first cry. “We could see her lungs through her skin as they moved,” Sonja said. Nothing could prepare her for how tiny Amillia was.

According to NBC News, it took four months and many complications, including a lack of oxygen and bleeding on the brain, before little Amillia could be taken home. The little girl still needed oxygen when she was taken home.

Today, Amillia is a happy, healthy 11-year-old girl – a far cry from the tiny premature baby she once was. “To think that she could have been an aborted foetus just left to die makes me physically ill,” Sonja says.