Drinking alcohol during pregnancy common in England, Ireland and Australasia 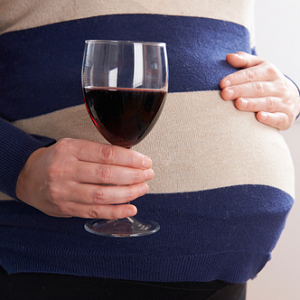 Though most had "low levels" of intake, the data suggested that alcohol use in pregnancy was prevalent and socially pervasive, said a study in the journal BMJ Open.

"New policy and interventions are required to reduce alcohol prevalence both prior to and during pregnancy," the authors wrote.

The World Health Organization (WHO) warns that alcohol use during pregnancy can damage the unborn child for life - though there is no certainty about the dose at which it becomes dangerous.

The worst effects are seen with foetal alcohol syndrome - whose symptoms can include facial abnormalities, and physical and intellectual disabilities.

Drinking while pregnant can also lead to miscarriages, and premature or still births, says the WHO website, and pregnant women are generally advised not to drink.

Where the statistics came from

The team looked at statistics from:

- The Pregnancy Risk Assessment Monitoring System (PRAMS), also in Ireland, with 718 respondents who gave birth in 2012, and

- The Screening for Pregnancy Endpoints (SCOPE) study based on interviews with 5,573 women between 2004-2011 from Auckland in New Zealand, Adelaide in Australia, Cork in Ireland, and Manchester, Leeds and London in England.

SCOPE had the highest overall reported prevalence, at 82 percent, of drinking during pregnancy, the team said, and GUI the lowest at 20 percent.

The number for PRAMS was 46 percent.

SCOPE also had the highest prevalence, 45 percent, of binge drinking while pregnant - measured as six or more units of alcohol per sitting.

One unit is about a glass of wine, a shot of spirits, or half a pint of lager.

Smokers were 17-50 percent more likely to drink while pregnant, the numbers showed. There was no comparison with other parts of the world.

"The amount of alcohol drunk varied across the three studies. Between 15 percent and 70 percent of the women said that they had drunk one to two units a week during the first three months (trimester) of their pregnancy," the researchers said.

The number of units dropped substantially in all countries from the first to the second trimester, but the team said this was little comfort.

"Since most women who consume alcohol do so at lower levels where the offspring growth and development effects are less well understood, the widespread consumption of even low levels of alcohol during pregnancy is a significant public health concern."

New test for Down Syndrome a major advance

Eating own placenta has no benefits for women