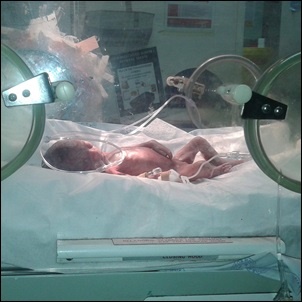 "I gave birth to a beautiful 18 week old little girl," says the mother who lost her baby at Edenvale Hospital. (Supplied)

A 23-year old woman is devastated after losing her baby at a hospital in Johannesburg on 5 May, where she went into premature labour without any healthcare workers to assist her.

The parents, who opened up to Health24, and wish to remain anonymous, feel they have been through a horrifying three days at Edenvale Hospital.

"I gave birth after screaming and pleading for them to stop the labour and they just ignored me," the distraught mother told Health24.

She said after a while a nurse finally came to her. "I told her I had been screaming with pain and calling for help. I told her my baby was too small for me to give birth and asked for something to stop the labour. I received two injections, but it was already too late."

"A short while after that, I gave birth to a beautiful 18-week-old little girl who was left on the bed with me, as I was being ignored again.

"I told them the baby was on the bed, but nobody even cared enough to come and have a look to see if she was moving."

After further attempts to get the attention of staff, the same nurse attended to her.

"The same sister came in and lifted the blanket, had a peep and then ran off again after I told her my baby was alive."

After being weighed, the baby was placed in an incubator with oxygen.

(In the picture below the 18-week-old is still breathing.) Image supplied "After a while she stopped breathing," she said as she broke down. "They just decided she was too small to make it and did not even try reviving her."

The father told Health24 that the mother went to Edenvale hospital after her water broke at 18 weeks. "She was told this is normal and that she should come back if there were problems."

He said she returned the next day and a doctor advised that she should go for sonar and some tests the following morning. "But before that could happen she started contractions late that night, so I immediately rushed her to the hospital."

She was sent to the labour unit, he explained, but because it was full, had to be sent to casualties where she had been given a mild steroid to stop the contractions.

The father said after a long wait it was suggested that they go home and return at 07:00. However, she had to be rushed back to hospital at 06:15 because she was in terrible pain.

"When we got there ... she gave birth in front of an open door with no one to help her. When the child was born, she had to call for at least three minutes before they even looked at her. They checked to see if the child was breathing and put her in an incubator, but then left the child next to the mother till she died."

Speaking to Health24 after 15:00 on the day he said: "The child is still next to the bed and has changed colour already."

What the hospital records show

The Gauteng Health Department immediately looked into the incident after being contacted by Health24.

Spokesperson Steve Mabona told Health24 hospital records indicate that the patient went into premature labour after "suffering from lower abdominal pain in which spontaneous termination was imminent and could not be prevented".

He said the patient was immediately attended to and necessary medical care was administered. "The patient went into premature labour and delivered a female foetus weighing 600gms. The foetus died soon after delivery."

Mabona pointed out that the patient did not have a history of ante-natal clinic visits and turned down post-natal counselling and care.

"The department requests patients who experience difficulties in any health institution to report their concerns to Quality Assurance Officers based at all our institutions.

"If they are not satisfied they should report to Facility Managers (CEO of the respective hospital or the Clinic Manager as applicable). Their concerns will be taken seriously and thoroughly investigated."

He also encouraged patients to lodge any complaints through the 24 hour call centre on 0860 011 000.

In the three-year period of 2011 to 2013, South Africa recorded over 60 000 perinatal deaths, a combination of foetuses that are born dead, known as stillbirths, and babies that die in the first week after birth.

We live in a world where facts and fiction get blurred
In times of uncertainty you need journalism you can trust. For only R75 per month, you have access to a world of in-depth analyses, investigative journalism, top opinions and a range of features. Journalism strengthens democracy. Invest in the future today.
Subscribe to News24
Related Links
South Africa's dying babies
Newborns struggle to survive
HIV free babies face other death risks
Next on Health24
‘Morning sickness’ in pregnancy needs a new name, researchers argue