Older dads' sperm isn't what it used to be 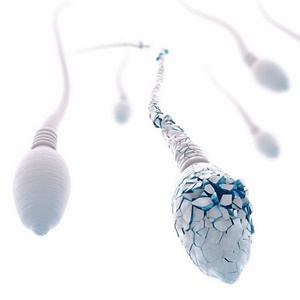 It seems men may have a biological clock too.

Just because a guy can make babies later in life doesn't mean it's risk-free.

The partners and children of men who become fathers at an older age are at increased risk for health problems, a new study finds.

"While it is widely accepted that physiological changes that occur in women after 35 can affect conception, pregnancy and the health of the child, most men do not realise their advanced age can have a similar impact," said study author Gloria Bachmann. She's director of the Rutgers University Women's Health Institute in New Jersey.

For the study, Bachmann and her team analysed 40 years of research on how parental age affects fertility, pregnancy and the health of children.

The investigators found that men aged 45 and older can have decreased fertility. Their partners may be at increased risk for pregnancy complications such as gestational diabetes, preeclampsia and preterm birth.

Infants born to older fathers have lower Apgar scores (an assessment of health after birth) and a higher risk of premature birth, late still birth, low birth weight, newborn seizures and birth defects such as congenital heart disease and cleft palate, according to the review.

Also, as they get older, children born to older fathers have a higher risk of childhood cancers, psychiatric and cognitive disorders, as well as autism, the study found.

Bachmann said that these increased risks to partners and children stem from a natural decline in the male hormone testosterone, sperm degradation and poorer semen quality.

"In addition to advancing paternal age being associated with an increased risk of male infertility, there appears to be other adverse changes that may occur to the sperm with aging," Bachmann explained in a university news release.

"For example, just as people lose muscle strength, flexibility and endurance with age, in men, sperm also tend to lose 'fitness' over the life cycle," she said.

In the past 40 years, there has been a 10% increase in the United States in infants born to fathers older than 45.

As they do with older women, doctors should discuss with older men the possible effects their age will have on conception, pregnancy and the health of their child, Bachmann said.

Men who plan to delay fatherhood should consider banking sperm before age 35, or at least by age 45, to reduce the health risks to their partners and children, she suggested.

The study was released online in advance of publication in the journal Maturitas.

We live in a world where facts and fiction get blurred
In times of uncertainty you need journalism you can trust. For 14 free days, you can have access to a world of in-depth analyses, investigative journalism, top opinions and a range of features. Journalism strengthens democracy. Invest in the future today. Thereafter you will be billed R75 per month. You can cancel anytime and if you cancel within 14 days you won't be billed.
Subscribe to News24
Related Links
Supplemental steroids, testosterone may lower men's sperm counts
Harvesting sperm before ejaculation may help infertile men
Sperm DNA damage may lead to repeat miscarriages
Next on Health24
‘Morning sickness’ in pregnancy needs a new name, researchers argue