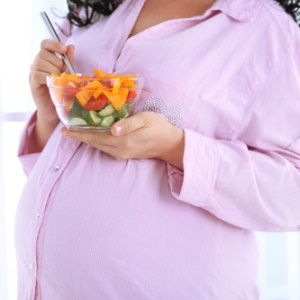 Eating well during pregnancy from Shutterstock

Pregnancy is probably the one time in a woman’s life when she is bombarded by more “old wives’ tales” and other doubtful advice than at any other period. Conflicting dietary admonitions characterise the advice pregnant women receive from their girlfriends, female relatives, midwives, mothers, grandmothers and popular magazines. No wonder modern women are confused about what they should eat to ensure that they and their developing baby are healthy.

Recently researchers have also been giving a great deal of attention to the lifestyles and diets of women of childbearing age before conception, and have coined the phrase “the first 1,000 days”, which encompass a child’s life from preconception to approximately the age of 2. These 1,000 days include the period of 9 months of pregnancy when the baby is dependent on the mother for all its needs.

According to paediatric experts, these 1,000 days can determine a child’s entire life. Dietary factors such as exposure to toxins and malnutrition, overweight and underweight, breastfeeding and weaning foods, combined with a variety of other factors are crucial to giving your baby the best chance in life.

According to Prof Kelly Tappenden, Editor-in-Chief of the Journal of Enteral and Parenteral Nutrition and an Endowed Professor at the University of Illinois, so many important developments take place during the first three months of pregnancy, that women planning to conceive should take into account the so-called “periconception maternal factors”, which can have important effects on their baby’s development in the womb.

The following factors have been identified as having negative effects on the success of pregnancies:

What is a “healthy pre-pregnancy weight?” This is probably one of the most popular questions among mothers-to-be.

Because the pre-pregnancy body mass index (BMI) is “an independent predictor of many adverse outcomes of pregnancy”, the best scenario is for women to have a normal BMI before they fall pregnant (i.e. BMI = 18-25). With nearly 70% of the female population in South Africa suffering from overweight or obesity, this requirement is going to be hard to achieve. On the other hand, many of our young mothers are chronically underweight with BMIs below 18.

According to Prof Tappenden, overweight during pregnancy puts mothers at risk of short- and long-term consequences such as obesity, heart disease and diabetes.

In 2009, the Institute of Medicine in the USA published the following table to guide weight gain based on prepregnancy BMI:

These recommendations will probably upset the “eat for two” brigade. For example, there is no recommendation for weight gain per week for the first trimester! This does not mean that you should starve yourself and your baby for those exceptionally important first three months, but it does mean that there is no need to imagine that because you are pregnant you suddenly need to gorge yourself, develop cravings for fatty food (many cravings are “all in the mind” anyway), or stop eating a healthy, balanced diet with a moderate energy content.

Next week we will continue with the critical subject of what pregnant mothers need to know about their diets to achieve the best results for themselves and their babies.

- Institute of Medicine (2009). Report Brief: Weight gain during pregnancy: Reexamining the Guidelines. May 2009.

We live in a world where facts and fiction get blurred
In times of uncertainty you need journalism you can trust. For only R75 per month, you have access to a world of in-depth analyses, investigative journalism, top opinions and a range of features. Journalism strengthens democracy. Invest in the future today.
Subscribe to News24
Next on Health24
Strange eating habits of pregnancy