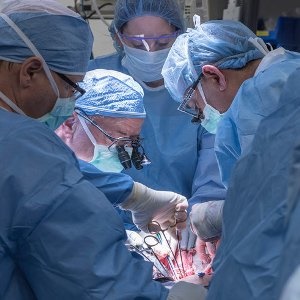 Doctors at the Cleveland Clinic during the uterus transplant operation on Wednesday. The procedure has been successfully performed in Sweden, but never before in the United States.

In a statement, the Cleveland Clinic announced that America's first uterus transplant had been performed on a 26-year-old woman, using a uterus from a deceased donor.

The hospital had long been planning for such a surgery, announcing last autumn that it would attempt 10 such transplants in a clinical trial. The hospital said it wouldn't release any more details about the transplant until a press conference next week.

Other countries have tried womb transplants and Sweden reported the first successful birth in 2014, with a total of five healthy babies so far.