Most women happy to share bathrooms with transgender women 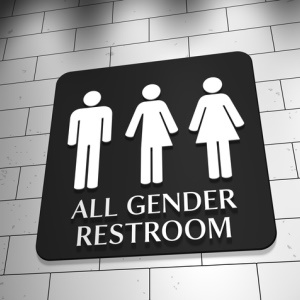 Most women aren't concerned about sharing public bathrooms with transgender women. But many men are concerned about the safety and privacy of the women in their lives, a new online opinion survey says.

A transgender woman is someone who identifies as female, but was registered at birth as male.

Researchers analysed 1,035 comments posted by readers of 190 online news articles about transgender women's use of public bathrooms. The issue is controversial, particularly in the United States, where so-called "bathroom bills" are being considered for transgender use of public facilities.

Men were about 1.55 times more likely than women to express safety and privacy concerns. Women were much less likely to comment on the news stories. When they did, they were more restrained than men.

Women were much more concerned about so-called "perverts" who pose as transgender females, according to the study in the journal Gender Issues.

One reason for men's stronger concerns about transgender women using female-designated public bathrooms is due to the fact that many men see themselves as so-called protectors of women, according to study author Rebecca Stones, of Nankai University in China and Monash University in Australia.

Another reason is how some men view transgender women. They don't consider them females, but rather men who are lying or mistaken about their gender identity, she said.

"Consequently, they view themselves as protecting females from these males intruding into private, female-only spaces," Stones said in a journal news release. "This may be further exacerbated by a fear of deception and a belief that transgender people are mentally ill or 'sick'."

Opponents believe that allowing the former crosses a societal boundary, and some politicians say they're concerned about the safety and privacy of the women and children with whom transgender females would be sharing a bathroom.

Transgender no longer to be classified as mental disorder

We live in a world where facts and fiction get blurred
In times of uncertainty you need journalism you can trust. For 14 free days, you can have access to a world of in-depth analyses, investigative journalism, top opinions and a range of features. Journalism strengthens democracy. Invest in the future today. Thereafter you will be billed R75 per month. You can cancel anytime and if you cancel within 14 days you won't be billed.
Subscribe to News24
Related Links
Doctors lack data on LGBT community
From she to he – a young man's journey to happiness
Supporting someone who is transgender
Next on Health24
Transgender no longer to be classified as mental disorder