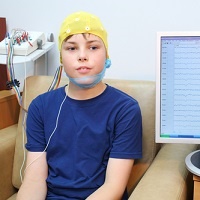 What is an EEG?

An electroencephalogram (EEG) is a test to establish if a patient is suffering from epilepsy. This explanation may however require some clarification: Many people who suffer from epilepsy may only have intermittent seizures and their EEGs may be normal almost all the time. Some epileptics might have intermittent abnormal activity (often called epileptic spikes), which can be seen on the EEG even if the patient is not having seizures. These spikes are a very strong indication that epilepsy might be present.

Apart from detecting epilepsy, an EEG is of great value in assessing brain function in patients with critical brain injury, and is sometimes also used to confirm brain death. For almost all other neurological conditions the EEG is of no value at all. It can for example not be used in the investigation of headaches.

The first EEG was recorded in the 1920's by Hans Berger, who became famous mainly for this development (coupled with a belief in telepathy); he committed suicide in 1941. The EEG is one of the oldest, yet one of the most important tests done on the human brain. A major problem is that the brainwaves recorded are of miniscule size and therefore need to be amplified, something which is associated with many abnormalities on the EEG that are caused by technical problems, and not actually from abnormal brain activity. The small size of the potentials is largely due to the fact that they represent the summed activity of minute nerve cells and particularly because of the effect of the skull, which is situated between the brain and the EEG pick-up.

The brain produces a large number of waves, representing a wide variety of cortical processes. These waves are arbitrarily broken up into waves of slower frequency, called delta and theta waves, and faster waves, called alpha and beta. By and large the purpose or function of these waves is unknown, and the cortical activity which causes the different waves is also very poorly understood. To use a common example, although all humans generate alpha waves when they close their eyes, and the existence of alpha rhythm has been known since Berger's first EEG, the brain processes, which result in alpha rhythms, are not known. Roughly speaking, alpha and beta waves are normal, but too much slow activity (theta and delta) indicates that there might be a problem.

How is it performed?

EEGs are read largely by neurologists and in the 21 st century they are read in much the same way as when they were first discovered. The test is usually done by a nursing sister or technician. Pick-ups are put on specific sites on the scalp, usually just with electrode jelly, sometimes with a slight scratch to the scalp beneath the pick-up, and occasionally with glue (which is removed with acetone). The test should take 15-20 minutes and involves patients resting quietly in a chair with their eyes open and shut. After a while patients are asked to hyperventilate for about 3 minutes; then flashing lights are used to try and trigger abnormal discharges. (The chances of these procedures triggering a fit are remote.) It's important to realize that, although wires are connected to the pick-ups so that brain waves may be recorded, no shocks are given. The wires are only for recording purposes.

Generally speaking, the greatest value of the EEG is in trying to evaluate the commonly occurring situation where someone has an inexplicable attack. Since establishing whether someone is suffering from epilepsy or not is of critical importance, not only for treatment, but also because of the potential implications for driving, insurance and work, the EEG can be a very useful test.

It is however not as straightforward as it may sound. Many people with epilepsy might have normal EEGs or vague non-specific abnormalities, which are hard to interpret. Quite often the detection rate or the ability of the EEG to establish the definite presence of epilepsy is quite low, especially if attacks are infrequent. If you are having epileptic seizures every day, your EEG will in all likelihood be abnormal, whereas if you only have one every few years, your EEG will tend to be normal.

There are ways to improve the detection rate. The easiest would be just to do more EEGs, and for longer periods of time. Sometimes, particularly because sleep itself is associated with a greater tendency to develop epileptic spikes, patients might be asked to go without sleep and then have an EEG-recording while drifting off.

We live in a world where facts and fiction get blurred
In times of uncertainty you need journalism you can trust. For only R75 per month, you have access to a world of in-depth analyses, investigative journalism, top opinions and a range of features. Journalism strengthens democracy. Invest in the future today.
Subscribe to News24
Next on Health24
Skull X-ray