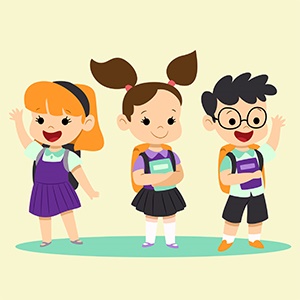 New teachers, new classmates, new subjects or even a brand new school all have their own stresses and strains.

Remember how you cried when your best friend from Grade 2 was in a different Grade 3 class? Or the time you left your lunchbox at home, someone stole your tracksuit top and the class bully kicked you? Here are some useful tips for parents at the start of the new school year:

Be an early bird. Everyone’s been on holiday for ages and sleeping in is probably part of the routine. Get an early start on the first day (and an early night before), so there’s time for a decent breakfast before traffic.

Pack a healthy lunch. An interesting lunchbox goes a long way to brightening up the first day. A regimented environment is a shock to anyone after a long holiday. Nice sandwiches, fresh fruit, milkshake or fruit juice and a chocolate could do wonders for morale.

Phone a friend. Ask around at work, or even phone the school secretary. Things are so much less daunting if your child at least recognises one other person in the class.

Don’t go on a stationery spending spree. Many teachers have specific requirements when it comes to stationery, so you might be spending money unnecessarily. Check first before going to town. Basics like a pen, pencil, eraser, ruler, sharpener and some coloured pencils should suffice for the first day.

Blend in. Don’t buy the purple school bag you really liked if every other child in the school has a khaki satchel. Children can be cruel and pick on those who are different.

Back off. If you keep hovering or intervening in minor classroom tiffs, the message you’re sending is that the world is a dangerous place and that you have no faith in your child’s ability to fight his or her own battles.