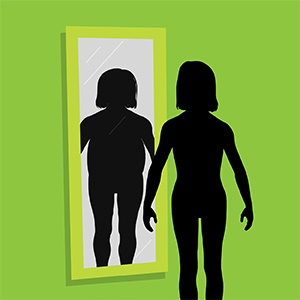 Get clued up on the four major eating disorders.

Your friend is almost always on a diet. She’s preoccupied with how much she eats each day, obsessively counts calories, and usually has excuses not to eat in front of you. Other days she eats more than her body can handle and is wracked with guilt afterwards.

Your friend may be struggling with an eating disorder.

Eating disorders are complicated illnesses that usually start in the mind (contrary to popular belief that it’s simply a “body” thing). These issues are characterised by abnormal eating habits and severe distress over body weight or shape.

An eating disorder can make people starve themselves, overeat or take on other unhealthy behaviour around food and body weight. Naturally, this can be damaging to your physical and mental health and wellbeing.

Eating disorders do not discriminate. These serious and often fatal illnesses can affect anyone.

What to know
There are four major eating disorders.

1. Anorexia nervosa: defined by an extremely low body weight, extreme and unnecessary weight loss, intense fear of weight gain, and distorted perception of self-image and body. The person has an unnatural fixation with a thin figure, and abnormal eating patterns (think starving themselves or lack of appetite).

2. Bulimia nervosa: characterised by eating large amounts of food in a short period, followed by purging. This includes self-induced vomitting, laxatives or diuretics, and excessive exercising.

3. Binge-eating disorder: known by compulsive overeating or eating an unusually large quantity of food in a short period, while feeling unable to stop or control how much you’re eating. It often leads to unwanted weight gain and a negative self-image, which can reinforce further compulsive eating.

4. Avoidant/restrictive food intake disorder: a persistent pattern of disordered eating characterised by selective eating, a disinterest in certain foods, and poor appetite. It may look like picky eating, but it’s often a mental or developmental disorder.

Help at hand
If you're worried that your friend (or even you) may have an eating disorder, speak out. But before you do, it's important to educate yourself about the disorder first.