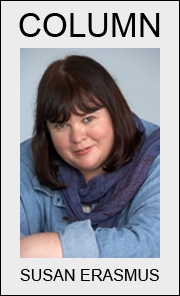 I know I am biased. But I really just love this city, in which I have lived for most of my life. Here are 10 reasons why the last week made me feel this way.

Unfinished fly-over. It's been there for decades, hovering over the city. But, if life passes you a lemon, make a lemonade – countless movies have been filmed here, so the city found a way to make the fly-over pay its own way. Now, a giant, and I mean giant, vuvuzela has been assembled on top of it. It almost looks as if it was specially built for the purpose. If anyone could blow that thing, the city would probably move a few metres to the left.

Finished fly-over. It's only been finished for a few months, but the new bridges over Hospital Bend are winners. Never thought concrete could be beautiful, but this manages. Even the pedestrian bridges are pretty. And it was all done with the minimum of fuss and disruption. (I'll not say anything about the N1 operations, which at least does give me hope that not all building operations and improvements will come to a grinding halt once the World Cup is over).

Efficient services. And no, I am not just talking the leafy suburbs. Despite Julius Malema's comments on poor services and the ANCYL's trashing of toilets, services are actually pretty efficient in Cape Town. Everywhere in Cape Town, by all accounts. Rubbish is collected, sewerage pipes are repaired and the streets are reasonably clean. I have seen clean-up crews doing their thing late at night in areas off-the-tourist-beaten track, such as around Wynberg Station/Taxi rank. (Can't decide which of their pullover vests I like least: the one that says Jesus saves, or the one that says Solid Waste)

Grey areas. Certain parts of Cape Town, such as the last two in which I lived, although officially being declared 'white' under the apartheid government, went through all 48 years of nationalist rule being gently and quietly mixed.  There is something about the soul of Cape Town that is beyond the reach of something as temporary as the government of the time. That goes for the present one as well.

Pedestrians rule, OK. You only have to drive down Adderley Street in rush hour, to see double-decker buses stopping for determined road-crossers. Pedestrian crossings are seen as mere suggestions. While this can be a tad irritating when you're a driver, there is something to be said for the determined show of force – a critical mass, if you wish – of a large number of pedestrians surging forward into the traffic, knowing it will stop for them. Power to the people. (Give me a break – I live with this, so I have to put a positive spin on it.)

Wildlife. This city is teeming with wildlife. OK, no lions or zebras, but pelicans, hadedas, Egyptian geese, ibises in their thousands. I even found a tortoise in my garden last week. It had a blotch of hadeda crap on its shell. Never have I seen anyone maltreating any of these wild animals. In fact, the traffic came to a standstill in Liesbeeck Parkway earlier this year as passersby ushered a family of Egyptian geese across the six-lane road.

SWC spruce-up. The signage for the SWC has gone up and it's fabulous. Bright, colourful and easy to understand. Central pedestrian crossings have little red lights flashing on the road to alert drivers when the lights are red, and there are even flashing numbers telling you how many seconds you have to get to the other side before being flattened (this is not Adderley Street, and don't you forget that). Everything is bright and clean and new and there are plants everywhere. (I will forgive them for not putting an apostrophe in the banner saying Africa's Greatest City).

High tolerance level. This is truly the Tavern of the Seas. It has always been a place in which people have been welcomed. People generally just seem to get along, and are tolerant of each other's differences. I am not saying we don't have a high crime rate, a high unemployment level, and economic problems, but Cape Town has a fairly happy-go-lucky vibe and it filters through to most things. (Just don't try and get a plumber on a Sunday morning). There's always humour lurking not very far below the surface.

The Bergies. Right. Life on the streets must be really hard, especially in winter. (I mean, when last did you see a really old Bergie?). But I have never come across Bergies who beg, or steal. In a way they are the real guardians of the city. I think possession of the soul of the city passes from one generation to the next. And they provide a humorous touch to things you just wouldn't find elsewhere. What human drama pre-empted the classic "Klap hom weer, Netta, klap hom."? And people say Afrikaans is on its way out?

People care. Capetonians have a fairly well-developed social conscience. Many people volunteer or try and make a difference in some other way. There's a realisation that green living matters, that street kids deserve a chance, and that social responsibility lies with everyone. People feed feral cats and recycle their waste. They adopt kids in distress.

Right. Now I can take off my rose-tinted spectacles, and notice the rubbish next to the highway, the sprawling informal settlements and the vast economic divide between rich and poor. But then I lift up mine eyes up unto the mountain, whence cometh my help.