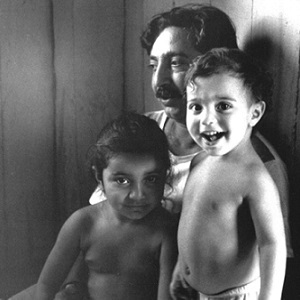 Chico Mendes with his children at home in Xapuri, Brazil, 1988.
Miranda Smith

It's the 25th anniversary of the death of environmental activism’s most notable martyr, but hardly anyone I've asked has the faintest idea who he is.

I'm speaking of Chico Mendes, the humble Brazilian rubber tapper who rose to champion the cause of protection and sustainable use of the Amazonian jungle. He was murdered 22 December 1988, aged 44, by ranchers - he had been trying to stop them from logging and driving locals off the land.

Mendes may be the most famous, but he's by no means the only conservationist to lose his life in the battle for the planet.

A death a week for the environment

Global Witness, an international NGO fighting human rights abuses related to the exploitation of natural resources, reports that over the past decade, on average, around one person a week has been killed defending rights related to the environment, specifically land and forests.

This figure, likely a considerable underestimate, counts those killed in targeted attacks and violence as a result of protests,  investigating or bringing grievances against mining, logging, intensive agriculture including ranching and plantations, hydroelectric dams, urban development or poaching.

Yet these causes and the activists involved remain relatively unknown to the public. Despite environmental journalists' repeated reminders that the crisis will hit the world's poor worst and first, environmentalism has never quite shaken off its middle-class associations. Perhaps this is partly because the "greenie" personalities the media seems to have most time for are from the wealthy elite: the likes of Al Gore and Leonardo di Caprio.

One green activist story that was well followed by the press this year was the detention of Greenpeace activists on the vessel Arctic Sunrise, protesting oil drilling in the Arctic. Greenpeace may help focus attention on environmental issues, but their campaigns, while no doubt heartfelt and not unimportant, are not, in my opinion, on the real front line of this global war.

There are other stories, harder to hear, of grass-roots activists and conservationists standing their ground, mostly in the beautiful threatened places of their birth, and fighting on despite real risk to their lives. Many of them come from working-class backgrounds, and their activism did not involve travelling thousands of kilometres to an exotic locale for a cool adventure.

Taking their rightful place beside Mendes, here are just a few such stories that did make the international press, yet seem to have left barely a ripple in the public consciousness:

The risk in defending the environment appears to be especially acute in Latin America and Asia, with Brazil, Peru, Colombia and the Philippines recording the most deaths.

Brazil retains the title for the highest number killed – at least 365 over the last decade.

Like husband-and-wife conservationists José Cláudio Ribeiro da Silva and Maria do Espirito Santo, ambushed and shot for their struggle against logging and clearcutting in the previously untouched forests of their home state.

Or 74-year-old Sister Dorothy Stang, murdered in similar fashion for her outspoken campaigning on behalf of the poor and the jungle that sustains them.

In Africa, in 2012 alone at least 41 wildlife rangers were reported killed in the line of duty.

One of the most dangerous areas is the Democratic Republic of Congo, where last year six people, including two rangers, were killed in a raid by poachers and Mai-Mai militia on the Okapi Wildlife Reserve. Thirteen endangered okapi were also slaughtered. The attack was reportedly in response to a crackdown on illegal elephant poaching and mining in the reserve.

Also in the DRC last year, Mai-Mai militia killed five more people in Virunga National Park, home to  the endangered mountain gorilla. Some 150 rangers have died in Virunga since 1990. The Mai-Mai, who had previously  threatened to do so, are also suspected of killing nine mountain gorillas with machetes and automatic weapons. The park is further under threat from British oil company SOCO, who want to undertake exploratory digging for oil in this world heritage site.

Such cases should surely help dispel the lingering notion that environmentalism is only for and by the privileged leisure classes, and that its concerns are wildlife and verdant views first, and people second. As Mendes said: