Of beefcake and peaches

“If you were an item of food, what would you like to be?

According to one vox pop survey I recall which posed this question, the most common reply from men was “a steak”, while most women apparently chose “a peach”.

This amusing line of thought – that certain foods have human qualities and gender associations – is taken seriously by sociologists and consumer analysts, and has been the subject of formal research.

Most recently, a study titled “Is Meat Male?”, soon to appear in the  Journal of Consumer Research, looked specifically at why men seem to be more reluctant than women to try vegetarian foods.

These findings are hardly groundbreaking to anyone familiar with TV advertisements (always a good source for crude cultural stereotypes), or the English language.

Men in ads are invariably shown in conjunction with burgers and red meat -- the latter often, in South African commercials, sizzling on the braai grid, another stereotypically male preserve. Women appear much more often with salads and diet foods like yoghurt; when they are tempted to indulge it tends to be with chocolate and other sweet confections.

Meat is meat and man must eat. Real men don't eat quiche (especially if it doesn't contain bacon). And although both genders may be addressed as “sugar” or “honey”, men are more likely to be called “beefcakes” or “hunks”, or the carnivorous-sounding “red-blooded”. Women, on the other hand, are "peaches", “candy girls”, “cheesecakes”, “cupcakes” or even, oh dear, “milkshakes”.

But does all this have any real impact on what we choose to eat?

It may well. There are significantly more female than male vegetarians, and women in general are better at eating their greens. Reasons suggested for this are that women lean towards bunny-hugging more, and they tend to take greater care of their health and pay more attention to diet. But the fact that salad is seen as feminine and a burger as more suitable fare for boys could play a role here too.

It may also fuel the “you are what you eat” myth that red meat is necessary for building muscle strength. (Yes, it is a good source of protein, and yes, it's a little harder to get ready protein from non-meat sources. But it's not impossible either, not even for vegans.) This simplistic idea that eating lots of muscle from big strong muscular animals will give you big strong muscles in turn always puts me in mind of, well, cannibals, believing they could imbibe someone else's power by ingesting parts of him.

Red meat is seen as “strong, traditional, macho, bicep-flexing,” say the “Is Meat Male?” authors. “Soy is not. To eat it, [men] would have to give up a food they saw as strong and powerful like themselves for a food they saw as weak and wimpy.”

The researchers conclude, sensibly, that food marketers and health advocates ignore such powerful associations at their peril if they're truly concerned about getting men to increase their fruit and veg intake.

But then they make the laughable suggestion that “reshaping soy burgers to make them resemble beef or giving them grill marks might help cautious men make the transition.”

I'm pretty sure it's going to take a lot more than that to get more men (and meat-loving women too) over to the Green Side. For one thing, most soy products are made to vaguely resemble their meatier counterparts already, a pretence which just seems to encourage further derision from the carnists.

What we need more of on soy patty packaging and in advertisements for salad are images of real men who really eat their greens.

I've used this wonderful stereotype-busting picture – of vegan body builder Robert Cheeke – before in an article, but he makes the point so eloquently, without a trace of animal protein (or steroids, in case you're wondering), or indeed without needing to say a word, that I can't resist sharing it with you again: 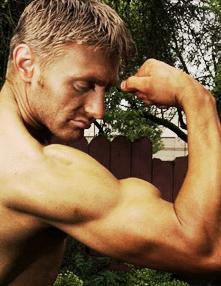 Do you worry about what your food choices say about you? Join the discussion below.

Meat is the main event

The vegans strike back