It all started with a tweet in on 8 February 2014 when Pippa Leenstra asked respected Prof Tim Noakes and Sally-Ann Creed, authors of the Real Meal Revolution, if a breastfeeding mother can 'bant'.

That single tweet exploded in the twitterverse, resulting in formal charges of misconduct laid against Prof Noakes at the Health Professions Council of South Africa (HPCSA).

Yesterday the HPCSA concluded the hearings, where the focus was on what defines a doctor-patient relationship.

Prof Noakes’ lawyer Michael Van der Nest testified that a doctor-patient relationship is confidential by definition – it exists between the doctor and the patient only.

However, the very nature of Twitter is non-confidential. You’re putting yourself "out there" in front of hundreds of thousands of pairs of eyes and opinions.

In the case of Leenstra’s question regarding babies and the LCHF diet, no doctor-patient relationship existed. Van der Nest explained that giving a scientific opinion on a public forum – such as Twitter – is no different to expressing it in a book.

“We gave direct evidence that she was not his patient and did not intend to foster a doctor-patient relationship,” Van der Nest continued. “In addition, you cannot have a relationship if the patient rejects the doctor’s advice – there is no affirmative action."

According to Van der Nest, Leenstra clearly rejected the advice when she tweeted “@2catsandababy @ProfTimNoakes @SalCreed thx [sic] but I’ll go with the dieticians recommendation”.

He also emphasised that through Twitter you’re communicating with many people; when you communicate via e-mail or in a consultation, you are talking to just one person.

“You aren’t going to find advise or a doctor-patient relationship on Twitter. There was no ongoing professional relationship between Noakes and Leenstra.”

He added that the HPCSA is attempting to create a doctor-patient relationship where one doesn’t exist. “You won’t find it on Twitter!" 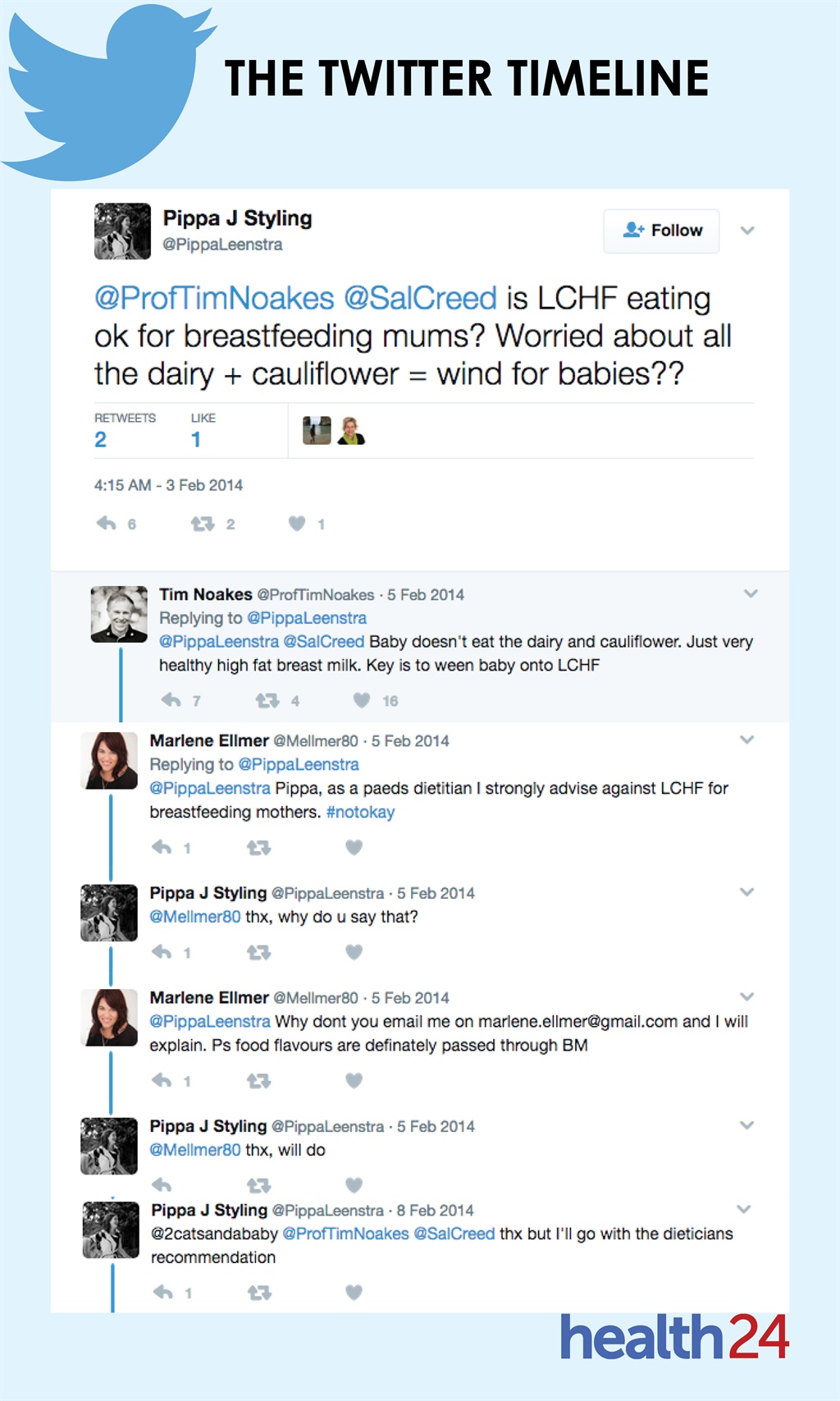 A matter of semantics

A doctor-patient relationship only begins when a doctor suggests a consultation. “This is common sense,” says Van der Nest. “A generic question can get a generic response. Leenstra was not asking about an illness – she was asking a general question about breastfeeding.

“Twitter is very demanding and you can’t keep everyone happy. [Noakes] tries to answer the ‘we’ questions not the ‘I’ questions – he likes to get a debate going. He participates in the debate. He responds in generic terms; he is respectful.”

Van der Nest explains that a “we” question makes it a general question as it can refer to anyone; whereas “I” makes it specific to one person.

The matter also pertains to our freedom of expression. “It means that every person who asks a question or states something on Twitter is a patient. Readers and listeners do not become patients,” said Van der Nest.

Noakes’ tweet is no different to what is written in the book Raising Superheroes, where it talks about weaning your child onto a LFHC diet.

"By implication I was saying that the child should not be weaned onto the traditional high sugar, high carbohydrate processed cereals," Noakes told Health24 last year.

“Is there any evidence of harm?” asked Van der Nest. “You are entitled to receive info whether it is right or wrong. Free speech should not be a sanitised commodity; it should ignite the truth. It is the bedrock of our democracy and we need it for science to grow.”

Two sides to the story

Advocate Ajay Bhoopchand, arguing for the HPCSA, reiterated that the LCHF diet is ketogenic, meaning that the body goes into starvation mode – something that is problematic for babies whose brains are still developing.

Advocate Dr Ravin Ramdass, however, spoke to the science of LCHF. “Those who don't understand the science for LCHF make vitriolic attacks against Noakes.

“The HPCSA has to prove LCHF is unconventional, has harm potential and is life-threatening. There no evidence.”

Where will it end?

On Tuesday Van der Nest added that Leenstra had Noakes' Real Meal Revolution book and would have understood the concept. The HPCSA never called her as a witness to determine whether she had been harmed.

The HPCSA will present their findings on Friday 21 April.

We live in a world where facts and fiction get blurred
In times of uncertainty you need journalism you can trust. For 14 free days, you can have access to a world of in-depth analyses, investigative journalism, top opinions and a range of features. Journalism strengthens democracy. Invest in the future today. Thereafter you will be billed R75 per month. You can cancel anytime and if you cancel within 14 days you won't be billed.
Subscribe to News24
Related Links
Tim and Marilyn Noakes: We are fighters who never quit
What will happen to Noakes if he is (really) found guilty?
HPCSA to say why they instituted a disciplinary inquiry against Noakes
Next on Health24
Intermittent fasting for weight loss: Two types work, according to new review