Fruit and veg – how much is enough? 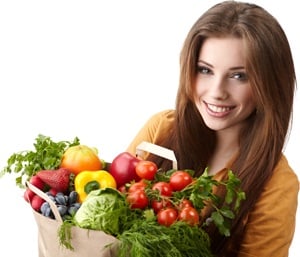 Researchers have more evidence linking a diet with lots of fruits and vegetables to better health outcomes.

The protective effects of fruits and veggies leveled out at five servings per day, which supports current dietary recommendations, senior author Dr. Frank B. Hu, of the departments of nutrition and epidemiology at the Harvard School of Public Health in Boston, told Reuters Health by email.

The findings are from a fresh analysis of 16 existing studies that involved more than 800,000 people. The studies lasted at least four years, and sometimes up to 26 years. Around 56,000 participants died during the studies.

Six studies included data on vegetables in the diet over time, six examined fruits, and four included both. The studies were conducted in the U.S., Asia and Europe.

Compared to people who ate no fruits or vegetables, those who ate one serving per day were roughly five percent less likely to die of any cause over the course of the studies. And with every additional serving, the risk of death decreased by another five percent, according to the combined analysis published in BMJ.

Connection, but no proof

Most of the studies took into account people's age, body mass index, smoking and alcohol consumption, which can all affect the risk of dying from heart disease or other problems. But since it only included observational studies, the review can't prove that these dietary habits will protect people from heart disease and death, only that the two are connected. People in the studies could have been making other lifestyle choices that would influence the results.

It would not be feasible to do a randomised controlled trial on consumption of fruits and vegetables because it would involve thousands of people eating the same diets for many years, Hu said. In the absence of those, large prospective cohort studies like the ones he looked at are the best available evidence, he said.

"For instance, the Lyon Diet Heart Study and the PREDIMED study have shown a significant reduction of cardiovascular events by a Mediterranean-style dietary pattern which includes a large amount of fruits and vegetables," said Bao, a postdoctoral fellow at the Eunice Kennedy Shriver National Institute of Child Health and Human Development at the National Institutes of Health in Rockville, Maryland.

No evidence of harm

Eating more than five servings daily may confer benefits in other areas, like stroke risk, and even if it does not, there is no evidence of harm from a high-plant diet, he said.

"Since the average consumption of fruits/veggies in the general population is far below five servings per day, there is still a long way to go before meeting the recommended intakes," Hu said.

They did not look at individual fruits and vegetables, and more research will be needed to examine the health effects of specific foods in this category, he said.

Go green for healthy blood pressure
Fruit and veg: 7-a-day – How can we achieve this?
Do greens make you groan?

We live in a world where facts and fiction get blurred
In times of uncertainty you need journalism you can trust. For only R75 per month, you have access to a world of in-depth analyses, investigative journalism, top opinions and a range of features. Journalism strengthens democracy. Invest in the future today.
Subscribe to News24
Related Links
Are you eating enough 'powerhouse' vegetables?
Why you need 7 fruits and veg a day - and how to get them
Fruits and vegetables linked to fewer strokes
Next on Health24
Prunes: digestive marvels