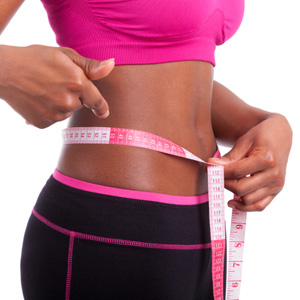 iStock
Black women will lose less weight than white women even if they follow the exact same exercise and diet regimen, researchers report.

The reason behind this finding is that black women's metabolisms run more slowly, which decreases their daily energy burn, said study author James DeLany, an associate professor in the division of endocrinology and metabolism at the University of Pittsburgh School of Medicine.

"African-American women have a lower energy expenditure. They're going to have to eat fewer calories than they would if they were Caucasian, and/or increase their physical activity more," said DeLany. His report is published in the issue of the International Journal of Obesity.

DeLany and his colleagues reached this conclusion during a weight-loss study involving severely obese white and black women.

Previous studies have shown that black women lose less weight, and the researchers set out to verify those findings, DeLany said.

The research included 66 white and 69 black women, who were placed on the same calorie-restricted diet of an average of 1 800 calories a day for six months. They also were assigned the same exercise schedule.

The black women lost about 3.6 kg less, on average, than the white women, the researchers found.

The explanation can't be that black women didn't adhere to the diet and exercise plan, DeLany said. The researchers closely tracked the calories each woman ate and the calories they burned through exercise, and found that black and white women stuck to the program equally.

"We found the African-American women and the Caucasian women were both eating nearly identical amounts of calories," DeLany said. "They were as adherent in physical activity as well."

That leaves variations in biology and metabolism to explain the difference in weight-loss success, the study authors said.

"The African-American women are [equally] as adherent to the behavioural intervention," DeLany said. "It's just that the weight-loss prescription is wrong because it's based on the assumption that the requirements are the same."

The difference in weight-loss success between black and white women has been known for some time, said Dr Mitch Roslin, chief of bariatric surgery at Lenox Hill Hospital in New York City.

"There are racial and genetic differences in obesity," Roslin said. "These things are real."

"However, this study advances our understanding by ruling out other explanations," Roslin said. "It's not just related to socioeconomic class or access to care or environmental situations."

One reason for the difference might be that European foods prevail in America, and form the basis of the modern diet, Roslin said. These foods might not burn as efficiently in the descendants of people from Africa, Asia and other parts of the world.

"People of Western European or Eastern European descent have evolved greater mechanisms to withstand the pressures of the modern diet," Roslin said. He said studies have found that Asians subjected to a Western diet are more likely to develop metabolic syndrome and diabetes at a much lower body-mass index (BMI) than whites. BMI is a measure of body fat based on height and weight.

Weight-loss doctors will need to keep these biological differences in mind when prescribing diet and exercise regimens for black women, DeLany said.

"They can't just base caloric restriction on body weight," he said. "They have to take into consideration [people's] lower energy requirements."

DeLany said it's not clear whether these findings apply to black men, since much less data is available for them. But in a diabetes intervention trial, he said, black men lost about as much weight as white men following the same diet and exercise plan.

For more information on weight control, visit the US National Institutes of Health.