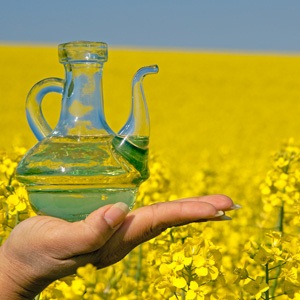 Switching to a diet low in simple sugars and high in healthy fats, like the types found in canola oil, could help people with type 2 diabetes control their blood sugar, according to a new study.

People with type 2 diabetes who were advised to follow a diet with a low glycaemic index supplemented with extra canola oil had lower blood glucose levels and greater reductions in heart risk than those who ate a diet high in whole grains, researchers found.

Gradual increase in blood sugar
Canola oil is rich in alpha-linolenic acid, a type of omega-3 fatty acid also found in walnuts, as well as monounsaturated fatty acids, which are also in avocados and olives.

Sugar builds up in the blood of people with type 2 diabetes because it can't be absorbed by cells, ultimately increasing the risk of other health problems such as heart disease.
Read: Heart disease – the facts

"We thought using canola oil might be a good way to hit the heart disease and the high glucose problem," said Jenkins.

The researchers recruited 141 people with diabetes, all of whom were taking medication to help lower their blood sugar levels. None of the participants reported smoking, drinking excessively or having other illnesses such as heart disease, liver disease or cancer.

Glucose levels dropped
Jenkins and his colleagues randomly assigned the participants to one of two groups.

People in the test group were asked to supplement their diet with four and a half slices of canola oil-enriched whole wheat bread each day and were told to focus on eating foods with a low glycemic index.

Those in the comparison group were instructed to eat seven and a half slices of whole wheat bread without the added canola oil each day – providing an equivalent number of calories – and to avoid products made with white flour.
Read: Could white bread be making you fat?

Over the next three months, blood glucose levels dropped in both groups, but the drop was about one and a half times larger among those on the canola oil-enriched diet. Improvements in other measures of heart disease risk generally favoured the test diet as well.

"The thing that really surprised us is that those who seemed to be most in need benefited the most," Jenkins said.

Effect on cardiovascular disease
He said the participants who had more weight in their mid-region and those with high blood pressure had the strongest blood sugar response to the test diet.

"This is an important incremental finding that supports previous studies which show that diet may have an effect on cardiovascular disease," said Dr Hertzel Gerstein, an endocrinologist at McMaster University in Hamilton, Ontario, Canada, who was not involved in the new study.

He said that even though the difference was only slight, the research supports the idea that diet could be an important way of treating people with diabetes.

"The one message I always tell patients is changing your diet can help – it won't be a waste of your time," Gerstein said.

Read more:
The skinny on canola
How to use the glycaemic index
Heart disease – the facts