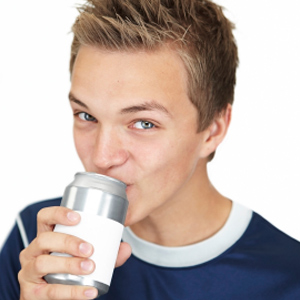 iStock
Carbonation, an essential component of popular soft drinks, alters the brain's perception of sweetness and makes it difficult for the brain to determine the difference between sugar and artificial sweeteners, according to a new article in Gastroenterology, the official journal of the American Gastroenterological Association.

"Tricking the brain about the type of sweet could be advantageous to weight loss. It facilitates the consumption of low-calorie drinks because their taste is perceived as pleasant as the sugary, calorie-laden drink."

The study identifies, however, that there is a downside to this effect; the combination of carbonation and sugar may stimulate increased sugar and food consumption since the brain perceives less sugar intake and energy balance is impaired.

This interpretation might better explain the prevalence of eating disorders, metabolic diseases and obesity among diet-soda drinkers.

Investigators used functional magnetic resonance imaging to monitor changes in regional brain activity in response to naturally or artificially sweetened carbonated beverages. The findings were a result of the integration of information on gastric fullness and on nutrient depletion conveyed to the brain.

Future studies combining analysis of carbonation effect on sweetness detection in taste buds and responses elicited by the carbonated sweetened beverages in the gastrointestinal cavity will be required to further clarify the puzzling link between reduced calorie intake with diet drinks and increased incidence of obesity and metabolic diseases.

We live in a world where facts and fiction get blurred
In times of uncertainty you need journalism you can trust. For 14 free days, you can have access to a world of in-depth analyses, investigative journalism, top opinions and a range of features. Journalism strengthens democracy. Invest in the future today. Thereafter you will be billed R75 per month. You can cancel anytime and if you cancel within 14 days you won't be billed.
Subscribe to News24
Related Links
Why soda is bad for you
Fizzy drinks tied to kids' behaviour problems
Sugary drinks increase diabetes
Next on Health24
Avocado lovers: Eating two servings a week may help lower heart disease risk