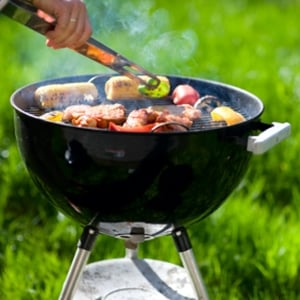 For many people, summer just wouldn't be the same without a braai. However, the blackened meats and smoky flavour that come with grilling could put your health at risk, experts caution.

The good news, though, is that by planning ahead and making some smart choices, you can enjoy summer braais and reduce your exposure to cancer-causing chemicals.

High-heat grilling can convert proteins found in red meat, pork, poultry and fish into heterocyclic amines (HCAs). These chemicals have been linked to breast, stomach, prostate and colon cancer.

"What happens is that the high temperature can change the shape of the protein structure in the meat, so that it becomes irritating in the body and is considered a carcinogenic chemical," Stacy Kennedy, a nutritionist at the US Dana-Farber Cancer Institute, said in a news release.

Another cancer-causing agent, called polycyclic aromatic hydrocarbons (PAHs), is found in the smoke from the barbecue. PAHs form when fat and juices from meat cooking on the grill drip down onto the heat source.

"That's where the main cancer-causing compound occurs in grilling," Kennedy said. "So you want to reduce the exposure to that smoke."

For those who plan to fire up the grill this summer, Kennedy offered the following tips to reduce exposure to cancer-causing agents:

- Try thin marinades. Thicker marinades tend to char, which could increase exposure to cancer-causing agents. Choose marinades made with vinegar or lemon, which will form a protective layer on the meat.

- Reduce grilling time. Always thaw meat before cooking. Meat and fish also should be partially cooked in the microwave before grilling. This will reduce cooking time and the risk for smoke flare-ups.

- Flip often. Flipping burgers once every minute will help prevent burning or charring.

- Consider food placement. Be sure to place food at least six inches away from a heat source.

- Create a barrier. Do not allow juices to spill and produce harmful smoke. Line the grill with aluminium foil or cook on cedar planks.

- Consider veggies. Try grilling your favourite vegetables since they do not contain the protein that forms harmful HCAs. "People are surprised, but you can safely eat charred vegetables," Kennedy said. "They have different proteins that are not affected the same way as the meat protein."

Despite the risks, Kennedy said, barbecue enthusiasts should keep things in perspective. "If you're grilling and following the proper safety tips, the risk of getting cancer from grilling food is very low," she said. "Being overweight or obese, is a far greater risk factor for developing cancerthan the consumption of grilled foods."

We live in a world where facts and fiction get blurred
In times of uncertainty you need journalism you can trust. For 14 free days, you can have access to a world of in-depth analyses, investigative journalism, top opinions and a range of features. Journalism strengthens democracy. Invest in the future today. Thereafter you will be billed R75 per month. You can cancel anytime and if you cancel within 14 days you won't be billed.
Subscribe to News24
Related Links
Braaiing tips to cut colon cancer risk
Could braais cause cancer?
Safer braaiing methods cut cancer risk
Next on Health24
6 foods proven to help reduce stress levels