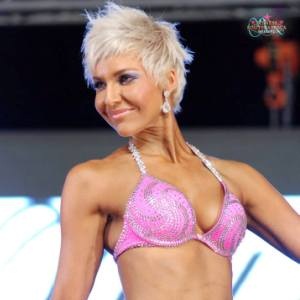 In South Africa, the sport is building momentum quickly. Body Building South Africa (BBSA)was formed in the 1960's but only became recognised by the South African Sports Confederation and Olympic Committee (SASCOC) in 2011.

Local television and radio presenter Liezel van der Westhuizen is an avid sportswomen and has recently taken up competing in fitness. She recently participated in the Mr and Ms Fitness Championship in Cape Town where she placed third. She also won "best costume design".

Because of the mounting pressure to compete, many bodybuilders have turned to anabolic steroids to beef up their appearance even more than what is naturally possible.

Use or abuse of anabolic steroids is likely to have similar results as those that occur when a women undergoes gender reassignment therapy, according to the Association Against Steroid Abuse (AASA). High testosterone levels can result in 'virilising' effects on the female body such as acne, increased facial and body hair, clitoral enlargement, deepening of the voice and decreased breast size.

The AASA indicates that steroid abuse also can have other serious effects in the long-term such as liver and kidney damage as well as increased LDL cholesterol levels, putting users at increased risk of heart attack and stroke.

Image: Bodybuilders flex their muscles for judges on stage during the Hong Kong Bodybuilding Championship on June 29, 2014 at the Queen Elizabeth Stadium in Hong Kong. Photo by Victor Fraile/Getty Images.

Jodie Marsh, a famous British glamour model, started bodybuilding in 2009 and placed 5th in her first competition, the Natural Physique Association Bodybuilding Championships held in the USA, after only 8 weeks of training. Marsh is an advocate of the natural approach and spreads awareness of the dangers of steroid use. Steroids or not, pre-contest preparation for bodybuilding can still put the body under a huge amount of strain and even result in death. These are just a few of the risks competitors take in order to be number one on competition day:

Glycogen depletion/glycogen loading is a specific diet strategy that bodybuilders endure for one week before their competition day. Bodybuilding.com states that it involves depleting the amount of glycogen (stored carbohydrate) in the liver for three days by eating an extremely low or zero carbohydrate diet.

After completing glycogen depletion, the bodybuilder then consumes a high carbohydrate diet for three days (glycogen loading). Because the process of depletion causes muscle starvation, the muscles to retain much more glycogen than normal once loading occurs. According to Hard Body Success, this process makes muscles look harder and more defined.

Unfortunately glycogen depletion can be risky. Training while reducing the amount of glycogen in the body can result in hypoglycaemia - low blood glucose levels. Hypoglycaemia can cause blurry vision, dizziness and a rapid heartbeat. In severe causes, it can result in fainting, seizures and even leave you in a coma, according to Healthline.

Read: What is hypoglycaemia?

Another tactic used by bodybuilders is that of sodium and water 'loading'. According to Flex, drastically increasing sodium and water intake for 12-16 weeks before a competition will result in lower water retention, making muscles look more vascular and defined.

Once again this can be fairly risky. Getting the sodium-to-water ratio wrong throws out the electrolyte balance in the body and can cause water intoxication. This occurs when the body can no longer excrete water and results in the cells of the body swelling, Health24's DietDoc says.

When this occurs in the brain, the consequences can be severe. According to Scientific American, brain swelling can cause respiratory arrest, seizures and even death.

Read: Drinking too much water can be dangerous

Another potential risk of sodium and water 'loading' is that of hypertension. High sodium intake over extended periods of time can result in high blood pressure (hypertension), putting competitors at an increased risk of cardiovascular disease and stroke.

Both an extremely low body fat percentage and overexercising can result in amenorrhoea - the absence of menstruation for at least three months in a row. Amenorrhoea can be devastating for women as they cannot become pregnant unless fertility treatment is successful.

EMedicineHealth explains that because of hormonal changes, amenorrhoea is also linked to low bone density and an increased risk of osteoporosis.

We live in a world where facts and fiction get blurred
In times of uncertainty you need journalism you can trust. For 14 free days, you can have access to a world of in-depth analyses, investigative journalism, top opinions and a range of features. Journalism strengthens democracy. Invest in the future today. Thereafter you will be billed R75 per month. You can cancel anytime and if you cancel within 14 days you won't be billed.
Subscribe to News24
Next on Health24
WATCH | Five hours of exercise per week required 'to avoid high blood pressure'