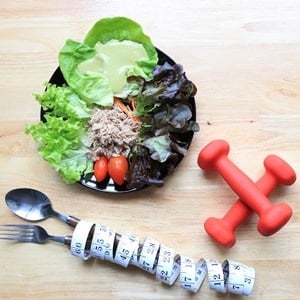 What can and can't you do when you're exercising while on the keto diet?

It’s no secret that a solid weight-loss strategy calls for a balanced diet and regular exercise.

But when it comes to the high-fat, low-carb ketogenic diet, your gym routine might change a bit. That’s because your body will be running on fat for fuel instead of energy-boosting carbs—and burning fat for fuel won’t give you the quick energy burst you need for tuck jumps and pushups like carbs will (but more on that later).

While it’s not impossible to exercise on the keto diet, it will definitely be different. Here’s the low-down on keto and exercise:

Yep, that’s because of the infamous keto flu. “It’s not uncommon to feel foggy, nauseous, and fatigued the first two to four weeks on the keto diet,” says Kelli McGrane, a registered dietician, for Lose It!, an app devoted to weight loss. “You might also get headaches.”

These symptoms are largely caused by changes in your metabolism now that your body has no choice but to burn fat for energy, and some are the result of electrolyte dips, she explains (the keto diet typically flushes a lot of water out of your body at first). Those shifts mean working out will feel like a total drag—at the start, at least—even if you’re a gym regular.

Another reason your body will feel extra sluggish during your sweat sessions? On a typical diet that doesn’t restrict carbs, glucose and glycogen (a.k.a., sugar and carbs) are stored in the muscles for quick energy—but low-carb diets deplete those stores, explains Erin Palisnki-Wade, a registered dietician and author of 2 Day Diabetes Diet, leaving your body with just fat to burn, and isn’t as readily available as carbs.

The type of workout matters.

Even after the keto flu has run its course, high-intensity workouts like HIIT, sprinting, or weightlifting—all exercises that require quick bursts of energy—will still be more strenuous (though not impossible), says Sarah Gawron, a trainer at Epic Hybrid Training and Solace. Again, because fat isn’t as readily available to muscles for energy as carbs are.

You’ll also likely get tired during those workouts quicker than usual. “You may find you have less endurance during exercise and ‘hit a wall’ earlier in your workout,” says Palinski-Wade.

This doesn’t mean you need to hang up your leggings for good, though. Low-intensity aerobic exercises can be your new BFF, says Gawron. That means yoga, jogs, and bike rides will be easier on your body as it uses fat as its main source of energy. And make sure to take it easy at first. “Generally, a low-to-moderate intensity, short duration workout would be most appropriate for the first week or two when beginning a keto meal plan,” she says.

One positive thing about being on the keto diet and working out, however: You might see a few more gains. According to a study in the Journal of Strength and Conditioning Research, resistance training on the keto diet might lead to an increase in lean body mass—a.k.a muscle gains.

Researchers tracked 25 men following a resistance training programme, some of whom were on the keto diet, and others who were on a traditional Western diet. While both groups gained lean body mass and lost body fat in the first 10 weeks, only the keto diet group showed more lean body mass gains after the final week. Clearly, a study with just 25 people isn’t necessarily proof of keto’s effect on gains, but it is some promising evidence.

If you’re really struggling with your keto diet exercise routine, you may want to switch things up.

If you feel pretty drained during workouts on the standard keto diet, another option is to try a targeted ketogenic diet, a variation of the keto diet where you eat your daily net carbs right before working out, says Scott Keatley, registered dietician of Keatley MNT.

You could also try a cyclical ketogenic diet—a.k.a., keto cycling—which calls for following the standard keto diet for the majority of the week and dedicating one-to-two days, also known as refeed days, to eating higher-carb meals to restore your energy levels, says Keatley. But keep in mind: If you choose cyclical keto, there’s a chance you’ll kick yourself out of ketosis on the days you eat more carbs than typically allowed on keto.

Overall, though (and much to the disappointment of many keto dieters), working out just won’t feel as good as it did pre-ketosis, according to Kat Ellis, a personal trainer. So, if going all out at the gym is what you love, the keto diet might not be the best choice for you.

We live in a world where facts and fiction get blurred
In times of uncertainty you need journalism you can trust. For 14 free days, you can have access to a world of in-depth analyses, investigative journalism, top opinions and a range of features. Journalism strengthens democracy. Invest in the future today. Thereafter you will be billed R75 per month. You can cancel anytime and if you cancel within 14 days you won't be billed.
Subscribe to News24
Related Links
Can the keto diet screw with your period?
The keto diet is popular, but is it safe?
Is it even possible to do the keto diet if you’re vegan or vegetarian?
Next on Health24
There may be an optimal time of day for exercise, and it's different for women and men