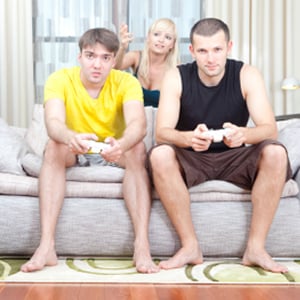 Newer-generation "active" video games give a slight boost to children's physical activity levels at home, according to a new study.

Most video games are passive and no better than watching television in terms of getting youngsters to move and burn energy. Children in developed nations spend 38 to 90 minutes a day playing video games.

But it wasn't known if active video games are any better. In this study published online July 1 in BMJ Open, Australian researchers looked at how removing passive games from the home or replacing them with active games affected the activity levels of 56 children, aged 10 to 12.

Levels of physical activity didn't vary much during any of the three eight-week periods, according to a journal news release. Removal of video games was associated with a nearly four-minute increase of moderate to vigorous physical activity per day and a nearly five-minute decrease in sedentary time. During the period when the children were allowed to play active video games, their daily activity levels increased by about three minutes and sedentary time fell by just over six minutes.

The differences appear small and, by themselves, are unlikely to have any effect on children's health, according to the study authors Dr Leon Straker at Curtin University, in Perth, Western Australia, and colleagues.

However, the researchers said these slight increases in activity are significant in light of the rapidly increasing levels of exposure children have to electronic gaming on computers, tablets and smartphones, as well as Internet surfing and social media.

"Therefore small changes across a variety of these platforms could result in a more substantial clinical impact," the study authors wrote.

"While our study focused on the home setting, school offers another opportunity for more active technologies such as sit-stand desks or active-input electronic media as part of lessons," they added.

The researchers also noted that replacing passive video games with active versions may be easier for families to maintain than a total ban on video games.

The Nemours Foundation has more about children and exercise.

We live in a world where facts and fiction get blurred
In times of uncertainty you need journalism you can trust. For 14 free days, you can have access to a world of in-depth analyses, investigative journalism, top opinions and a range of features. Journalism strengthens democracy. Invest in the future today. Thereafter you will be billed R75 per month. You can cancel anytime and if you cancel within 14 days you won't be billed.
Subscribe to News24
Related Links
Video games may help keep aging brains sharp
Frustrated people drawn to violent video games
Violent video games numb players to brutality
Next on Health24
7 best workout stories to motivate you for 2022