Faster, higher, stronger: science shows why triple jumpers may be the ultimate Olympians 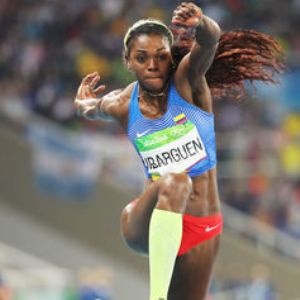 No athletes arguably embody Pierre de Coubertin’s Olympic motto – “faster, higher, stronger” – more fully than those competing in the triple jump. This dynamic track and field event comprises an approach run, followed by three consecutive phases: the hop, step and jump. The winner is the athlete whose rearmost mark in the sand is furthest from the takeoff board.

Research has shown that, at the landing between the hop and step phases, the force exerted by the athlete on the ground can be up to 22 times their body weight: imagine an athlete of 80kg briefly weighing 1.7 tonnes, and having to stand on one leg. This is the highest measured force that a human limb is exposed to during any intentional activity (so not including accidents such as car crashes).

For this reason, triple jumpers have stronger bones than normal people; in fact, their thigh and shin bones become thicker and denser in order to withstand the huge forces that they must undergo during the event.

In addition to being incredibly strong, triple jumpers must also be very fast; the fastest athletes in the men’s and women’s events will hit the takeoff board at around 10.5 and 9.5 metres per second respectively. These speeds are similar to those that will be seen in the long jump finals.

In fact, it was calculated that the longest hop phase ever measured in the triple jump (7.02 metres by Kenny Harrison of the USA) would have been equivalent to a jump of 8.29 metres had he landed in the style of a long jump. This would have been enough to win him the silver medal in the long jump at London 2012 – but in the triple jump, he simply landed on one leg and carried on.

Physics dictates that the higher in the air an athlete travels, the further they will jump – provided they don’t sacrifice their speed. So, the athlete needs to carefully balance the speed and the height of their jump, in order to perform really well. Because of this, technique is an extremely important aspect of the triple jump.

When Jonathan Edwards set the current men’s world record of 18.29 metres in 1995, he attributed his enormous 85 centimetre improvement from the previous year to the adoption of a “double arm shift” technique.

This involves a symmetrical swinging of both arms back and forth during each phase, rather than the asymmetrical arm swings used during running and walking. One of the benefits of this technique is that it allows athletes to spend longer applying force to the ground and therefore to propel themselves higher into the air. Computer simulations of triple jumping have indicated that this double arm technique is optimal, and indeed most male triple jumpers now use it.

The “double arm shift” is not easy to perform; the triple jump is a delicate balancing act – athletes need to maintain their stability while undergoing huge stresses and strains, and all during ground contacts of only one to two tenths of a second.

Read: How fit must a jumper be?

The slightest mistake, and the jump will end in failure. Very few women athletes use this technique in competition – but if they are to challenge Inessa Kravets’ world record of 15.50 metres, also set back in 1995, they may need to adopt it.

As well as the movement of the arms, the proportion of the total jump distance made up by each phase is also considered to be an important factor in the triple jump. Typically, the step is the shortest phase, making up around 30% of the total distance. Then athletes either distribute their efforts evenly in the hop and jump – what’s called “a balanced technique” – or they choose a hop or jump-dominant technique, where one of these phases is substantially longer than the other.

Whichever method competitors deploy at Rio 2016, there’s no doubt they’ve been training to run faster, leap higher, and be stronger than ever before. And in that sense, maybe they really are the ultimate Olympians.

Fair play at the Olympics: testosterone and female athletes

How fit must you be to run the sprints?

We live in a world where facts and fiction get blurred
In times of uncertainty you need journalism you can trust. For only R75 per month, you have access to a world of in-depth analyses, investigative journalism, top opinions and a range of features. Journalism strengthens democracy. Invest in the future today.
Subscribe to News24
Related Links
How can I learn to take part in jumping sports?
Why women watch the Olympics
WATCH: 3 worst injuries of 2016 Olympics thus far
Next on Health24
Success in Rio – a fine balancing act