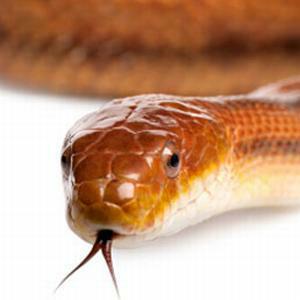 This may be the last thing that anyone with a touch of ophidiophobia – fear of snakes – would want to hear: flying snakes have surprisingly good aerodynamic qualities.

Scientists studying the amazing gliding proficiency of an Asian species known as the paradise tree snake say it does two things as it goes airborne. It splays its ribs in order to flatten its profile from round into a more triangular form, and it undulates while airborne - sort of swimming through the air.

Researchers led by Jake Socha, an expert in biomechanics at Virginia Tech, replicated in a plastic model the shape the snake assumes while airborne, and tested it to evaluate its aerodynamic qualities.

They placed the snake model in a water tunnel and used a laser to track flow patterns around the model.

"Our expectations going in were that it would not be very good because it does not look like a classically streamlined, airplane-type cross-sectional shape," Socha said in a telephone interview.

"What we got were some surprising aerodynamic characteristics. In fact, it was much better than we anticipated," Socha added.

The paradise tree snake is one of the world's five species of flying snakes, all from the genus Chrysopelea. To be precise, they are gliders, not actual flyers like birds and bats that achieve powered flight.

The mildly venomous snake – green and black with occasional touches of red and orange – has a diameter roughly equal to a human finger and is up to three feet (one meter) long. It lives in rain forests in Southeast Asia and South Asia, including Thailand, Malaysia, Singapore, Indonesia and the Philippines.

The snake takes to the air from trees, and is capable of gliding about 100 feet (30 meters). Socha said its gliding ability enables the snake to escape trouble and to get from one place to the next efficiently. He doubted that the creature is taking to the air in order to spot prey like lizards below.

"You can glide to a tree 30 meters away much more quickly than if you had to slither down the tree and then slither across the forest floor and then climb back up that tree," said Socha, whose research was published in the Journal of Experimental Biology.

This snake is one of numerous animals around the world that can glide through the air. Six types of mammals are gliders, including flying squirrels and an arboreal critter called the colugo. Some lizards also glide, including the Draco lizard and some geckos.

There are even gliding frogs and gliding wingless ants, as well as types of flying fish and even gliding squid.

Scientists are eager to unlock the secrets of flying snakes, especially considering that a snake shape would seem to be bad for aerodynamics. This study was funded in part by the Pentagon's Defense Advanced Research Projects Agency (DARPA), which Socha said was interested in the basic science behind what makes the snakes good gliders.

To people with ophidiophobia, the idea of a flying snake may be nightmarish. But Socha offered some reassuring thoughts.

"They are small and they're effectively harmless," Socha said. "And to tell you the truth, they're much more scared of you than you are of them. If you are near them, they're gliding away from you and not at you."