Fish is an essential part of a healthy diet. It’s rich in nutrients such as protein and vitamin D and is an excellent source of omega-3 fatty acids.

The downside is that it contains mercury, and a recent study shows the fish sold in South Africa’s retail stores contains mercury levels well above the World Health Organisation (WHO) guidelines.

The study that was done by the Council for Scientific and Industrial Research (CSIR), found that swordfish contains the most mercury and the yellowtail the least amount of this neurotoxin.

“The risk depends on how much fish one eats,” says Dr Brent Newman, a principal researcher at the CSIR.

“The limit that is allowable for fish products sold to the public is 0,5 mg/kg for most fish, but allowance is made for naturally higher mercury accumulation in large predatory fish such as swordfish, tuna and so on, and for these the guideline is 1 mg/kg.”

“Our study determined the average mercury concentration in the fish we analysed, and found that the concentration for swordfish exceeds 1 mg/kg.”

The fish were purchased in retail stores in the Durban and Cape Town areas over a period of 11 months. They were weighed, dissected and subsamples were analysed for the presence of mercury.

“This is known as bio-magnification,” says Newman. “The concentration of a chemical, in this instance mercury, is magnified up the food chain.” 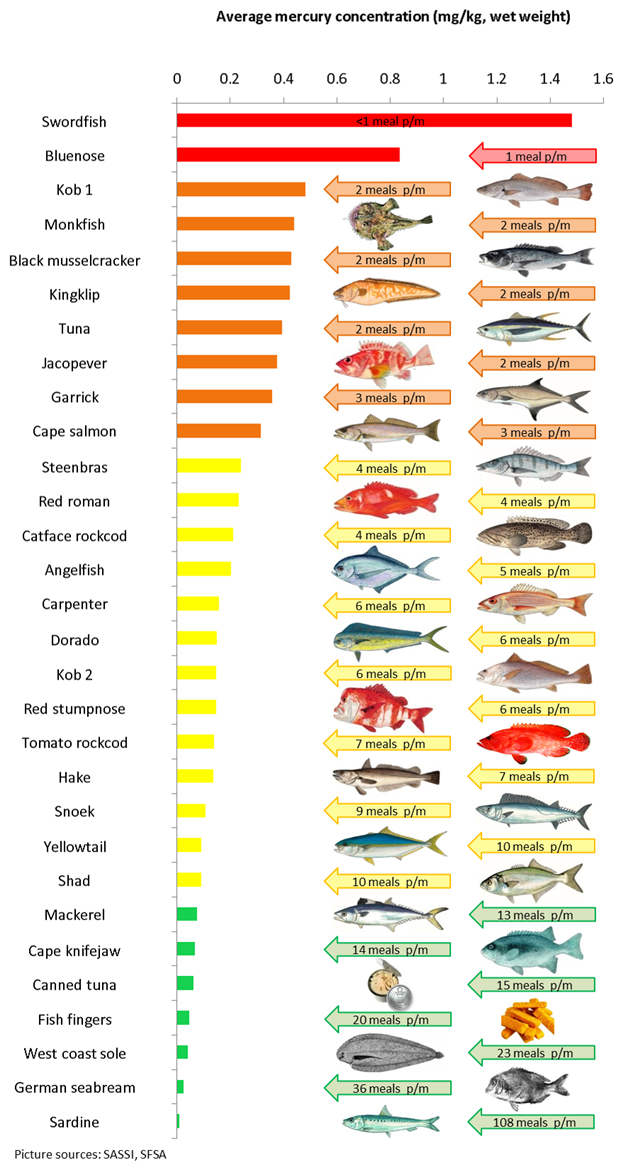 Newman says there are many potential health risks if too much mercury is consumed. These include:

“Death can result if exposure is excessive,” says Newman. “This is extreme and people will not typically be exposed to such high mercury concentrations.”

It’s often difficult to notice the subtle symptoms of too much mercury, but the following are common symptoms:

Despite the research Newman cautions people to not be afraid to eat fish.

“Fish are very, very important in the human diet. What people should be doing is eating certain fish in moderation, based on the fish’s mercury content.”

Mercury can cross the placenta, and is also transferred in breast milk.

We live in a world where facts and fiction get blurred
In times of uncertainty you need journalism you can trust. For 14 free days, you can have access to a world of in-depth analyses, investigative journalism, top opinions and a range of features. Journalism strengthens democracy. Invest in the future today. Thereafter you will be billed R75 per month. You can cancel anytime and if you cancel within 14 days you won't be billed.
Subscribe to News24
Related Links
Mercury in seafood linked to autoimmune diseases
Enjoying fish without the risk
Mercury exposure may raise diabetes risk
Next on Health24
Pollution causes 9 million deaths every year but it's not taken seriously, new research says