Confirmed: walking while texting slows you down 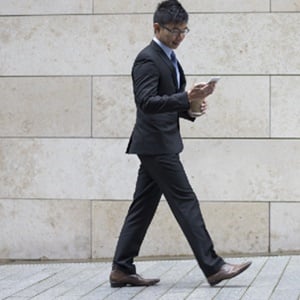 Texting while driving is clearly a bad idea, but it may be dangerously distracting while walking, too, a new study suggests.

Researchers asked 30 people to navigate an obstacle course three times and found they were significantly slower while texting and walking than when completing the route without any distractions.

When the researchers had people walk, text and do math quizzes on an iPhone all at the same time, it also slowed them down by about the same amount.

The lower speed was expected, said senior study authour Conrad Earnest, an exercise researcher at Texas A&M University in College Station. What was surprising, however, is that staring at the tiny screen didn't make people any more likely to crash into things.

"Despite our efforts to test the risk for tripping, participants could have been extra aware" of their surroundings, he said by email.

To see how texting and other distractions influenced walking skills, Earnest and colleagues used motion-detection equipment to analyse gait, speed, and collisions with obstacles, they report in the journal PLOS ONE.

Participants had an average course completion time of 19:32 seconds when all they had to do was walk. Adding texting to the mix slowed typical times down to 24:96 seconds, while texting and answering math questions yielded times of about 24:09 seconds.

The walkers slowed when approaching steps, platforms and stairs.

Texting and fielding math problems on the phones made people swerve more from side to side, but the difference wasn't big enough to rule out the possibility that it was due to chance.

Recognising they were distracted probably caused people to move more cautiously through the course, said David Schwebel, a psychology researcher at the University of Alabama at Birmingham who wasn't involved in the study.

"It's very hard for the brain to handle multiple tasks at the same time, and walking through the obstacle course in this study required people to negotiate things like steps that require some cognitive complexity to complete while they were also distracted by texting," Schwebel said by email.

It's also possible that the lack of crashes on the course show that humankind has already adapted to walking while texting, said Dr. Aimee Edell, a researcher at San Ramon Medical Center in California.

"This does seem to imply that people who routinely use mobile phones while walking can compensate quite well to prevent collisions," Edell, who wasn't involved in the study, said by email.

Even so, she cautioned that real life can be much more dangerous and difficult to navigate than an experimental obstacle course without any moving objects.

"Anyone who chooses to divide their attention while navigating a busy sidewalk, street or other public place increases their risk of accident or injury," Edell said.

Texting no good for serious conversations

We live in a world where facts and fiction get blurred
In times of uncertainty you need journalism you can trust. For only R75 per month, you have access to a world of in-depth analyses, investigative journalism, top opinions and a range of features. Journalism strengthens democracy. Invest in the future today.
Subscribe to News24
Next on Health24
Being authentic on social media is better for your mental health, researchers say