Sex in the Digital Age 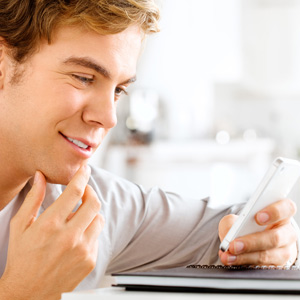 Shutterstock
Has finding a compatible partner, starting a relationship and, well… getting laid become easier and faster in our modern world of virtual social networking, cell phone messaging and online chat rooms? By all indications, the answer appears to be yes.

For one thing, there are approximately a gazillion online dating sites in cyberspace – some, admittedly less reputable than others – which cater for all shapes and sizes, tastes, lifestyles and predilections, religious inclinations, sexual proclivities and political convictions. Finding the love of your life or a willing participant for a one night stand has never been easier.

And it’s not just the dating sites that are doing the trick. Social networking sites like Facebook and Twitter as well as SMS messaging from cell phones have become the new and creatively employed lubricants of choice for modern cyber-junkies with amorous intentions. A recent survey of 1 200 men and women by the international print magazines Shape and Men’s Fitness reveals several interesting statistics:

While initial approaches and introductions are frequently made through social networking platforms like Facebook, most relationships tend to blossom via cell phone text messages. Male survey participants indicate that they text 39% more frequently than they make actual phone calls, while the figure jumps to 150% among women.

The overwhelming majority of women, more than 80%, say that social networking or cell phone messages make them feel closer to men than traditional face-to-face dates. According to American clinical psychologist Dr Belisa Vranich, virtual social networking “creates anticipation” and makes communication “more titillating”. She explains that “people tend to be more sexual when texting than in real life”.

For straight guys, the beauty of all of this is that most social networking sites are blessed with an “oversupply” of women – if there can ever be such a thing, really. A snap survey of 19 popular sites, including LinkedIn, Facebook, Twitter and MySpace revealed that 84% of them have more female than male users. And then there’s the added bonus of guaranteed safe sex, at least until you actually meet in person. Text messages and online intimacies do not spread any sexually transmitted diseases, although there are potential health hazards from assorted keyboard injuries and thumb strains to back aches and other afflictions related to ergonomics.

Modern technological advances have even made it easier to break off a liaison. No more messy, drawn out histrionics involving snot en trane by the bucketful once the relationship has run its course. Just a clean cut. By SMS. Some 43% of the women and 27% of the men participating in the Shape and Men’s Fitness survey say that they’ve been unceremoniously dumped via text message.

(Picture: man with cellphone from Shutterstock)

We live in a world where facts and fiction get blurred
In times of uncertainty you need journalism you can trust. For 14 free days, you can have access to a world of in-depth analyses, investigative journalism, top opinions and a range of features. Journalism strengthens democracy. Invest in the future today. Thereafter you will be billed R75 per month. You can cancel anytime and if you cancel within 14 days you won't be billed.
Subscribe to News24
Next on Health24
Consciousness is the brain's Wi-Fi