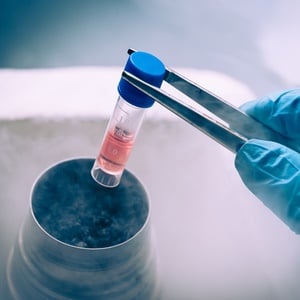 Stem cell therapy has been claimed to cure cancer, improve chronic conditions such as headaches, and even make your skin look younger. How can that not be a good thing?

You’ve probably heard about stem cell research before, but what exactly are stem cells, and how can stem cells injected into the body treat various diseases and conditions?

There has been enormous progress in this field over the last few decades, so let's take a look at how stem cell injections work.

What exactly are stem cells?

Stem cells are the body’s building blocks – the reserve cells that the body is made up of. These cells are able to produce multiple different cells, each performing a specific function. Stem cells can be divided into two main categories:

What is stem cell therapy?

Stem cell therapy can be categorised as regenerative medicine. Stem cells used in medical treatments are currently harvested from three sources: umbilical cord blood, bone marrow and blood. These are treatments that restore damaged tissue and regenerate new cells in the case of illness or injury.

While there are other forms of stem cell therapy, these are still in the early stages and regarded as research.

How is stem cell therapy performed?

Adult stem cells are derived from a blood sample and injected back into the patient's blood. The surrounding cells are then activated, stimulating rejuvenation in the area. In 2004 South Africa became the first African nation to open a stem cell bank. This involved embryonic stem cells for cloning research and not the "adult" stem cells used in treatment.

What does science say?

Prof Jacqui Greenberg from the University of Cape Town stated that although stem cells can potentially treat various diseases, they should be treated with extreme care.

She has no doubt that in time (in medical science particularly, progress is slow and measured in blocks of 10 years), stem cells will be the solution for many things. "But right now we have to strike a balance of not creating too much hype and raising hope too soon. Stem cells are the future, but the future is not now," Greenberg states.

The reason for this is that stem cells derived from an adult are too volatile at times. Researchers are not clear on how many of these stem cells will actually "survive" and "activate" to treat the condition at hand. Therefore it can't be predicted how many cells will survive and become functional.

There is as yet little proof that stem cells can actually fight disease when injected back into the host. Despite the success of IPS cell technology up to date, there are still challenges with regard to the purity of stem cells before their use in therapy.

Availability and cost in South Africa

Therapy starts with an initial consultation. During the second consultation vitals are checked, followed by either the fat harvest procedure under tumescent anaesthesia or bone marrow aspiration under local anaesthesia.

The stem cells are then cryopreserved and injected into the patient as needed. Prices of the treatment vary from R500 (for a once-off treatment in a small area, such as the hand) to R22 500 (a comprehensive process), depending on the condition being treated and length of treatment needed. This excludes the initial consultation fee and after-care.

There are also stem cell banks in South Africa, such as Cryo-Save, where stem cells from the umbilical cord blood are banked to be used for medical purposes. Cord blood is collected in advanced, tested, crypreserved and used as necessary. Unlike bone marrow,there is no need to take time to locate a possible donor and then determine whether he or she is still willing and able to donate if required for a transplant.

Do your own research

If you do want to go the stem cell route, make sure that the medical programme being offered is legitimate and that the projected outcome is based on real evidence.

There are a number of private institutions banking on the promise of curing any number of diseases with stem cells from a patient's own blood. The truth, however, is that there is no conclusive proof that the majority of these diseases can be cured with the person's own stem cells – annihilating the claim that stem cell therapy is the solution to all diseases.

We live in a world where facts and fiction get blurred
In times of uncertainty you need journalism you can trust. For 14 free days, you can have access to a world of in-depth analyses, investigative journalism, top opinions and a range of features. Journalism strengthens democracy. Invest in the future today. Thereafter you will be billed R75 per month. You can cancel anytime and if you cancel within 14 days you won't be billed.
Subscribe to News24
Related Links
Stem cell 'patch' may help treat heart failure
Signals decoded to make 12 cell types from stem cells
Should aborted foetuses be used for stem cell research?
Next on Health24
Can you stand on one leg for 10 seconds? It may be a sign of good overall health