Osteoporosis: not only a concern for women 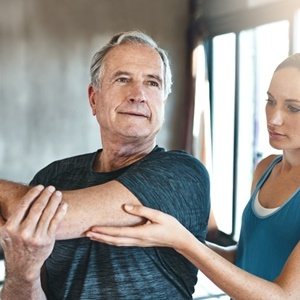 Statistics in South Africa show that the prevalence of osteoporosis is higher in women than men, especially in women older than 50. It is therefore common that we usually associate osteoporosis with women, and a condition that only women are prone to. But men can also be at risk.

Osteoporosis literally means ‘porous bones’. It’s a condition where bone tissue progressively degenerates. Often called the ‘silent killer’, osteoporosis can go undetected for many years before being diagnosed. The first sign of the disease is usually a fracture; by then, it’s too late to make up for the loss of bone density.

The body uses calcium stored in the bones to keep all the other organs functioning – more so if you are not eating enough calcium-rich foods to replenish these calcium stores. In someone who has osteoporosis, not enough new bone is formed by the body, or too much of the old bone is reabsorbed. Both these processes can lead to loss of bone density. A hormone imbalance (the lack of oestrogen or testosterone) can also cause bone mass loss.

Many cases of osteoporosis in men go undiagnosed, due to a misconception that this is a ‘women’s condition. An article previously published on Health24 tapped into the unawareness regarding osteoporosis in men. A survey conducted by the International International Osteoporosis Foundation (IOF) and the National Osteoporosis Foundation of South Africa (NOFSA) found that 86% of male and female respondents, and 92% of all male respondents older than 50 either underestimated a man’s risk of suffering a fracture or said they did not know. This was similar to the international average of 90%. This means that thousands of men are still unaware of osteoporosis.

Are you at risk?

According to the NIH Osteoporosis and Related Bone Diseases National Resources Centre in the US, osteoporosis can be primary, where it’s caused by age-related bone loss, or secondary, where lifestyle and health factors put some people more at risk than other for getting osteoporosis.

The following factors can put men more at risk for osteoporosis:

Men can also lower their risk for osteoporosis by: