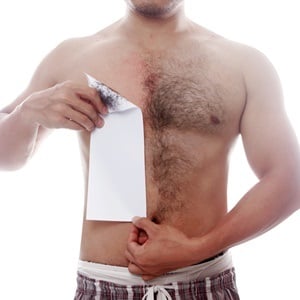 Shutterstock
Men are taking a greater interest in personal grooming and in body hair removal. Once seen as a typically female effort, it has slowly made its way to becoming a socially acceptable male effort too.

The number of male customers for body hair removal has been steadily increasing and with over 60% of women saying they prefer a man who is interested in personal grooming, that number is sure to keep rising. When done correctly, hair removal can leave you feeling more hygienic and more attractive to the opposite sex.

However, not all methods are for everyone, every skin type or even every body part. Professor Elna McIntosh explains the different options available and what they entail:

Trimming body hair is an easy way of looking after your appearance without going overboard. Trimming the hair obviously doesn't remove it, but it certainly gets rid of the excess and it keeps things clean and tidy which may make it ideal for ideas for areas such as the brows, armpits and the pubic region.

There are also no side-effects. The downside, however, is that the effects of trimming are very short-term and regular attention is required to keep things in order.

This is easily the most common form of hair removal because it is cheap, quick and reasonably straightforward to carry out, making it an attractive option for the modern man. However, despite its convenience, shaving has the disadvantage of being one of the most temporary forms of hair removal: depending on the area shaved, results only last for up to 24 hours.

Additionally, skin irritation and ingrown hairs are also a common side-effect of shaving, especially for men with sensitive skin. When shaving, always shave in the direction in which your hair grows; to combat skin problems associated with shaving, invest in a quality razor and change the blade (or sharpen it) regularly.

After shaving, moisturising the shaved area or apply after-shave balm.

Using tweezers is ideal for getting rid of the odd stray hair anywhere on the body or for tidying up certain areas where there is not much body hair in the first place. However, tweezing can be painful, and like most forms of hair removal, ingrown hairs are a possibility. Additionally, because tweezing requires you to remove one hair at a time, it is not a worthwhile form of hair removal for those wishing to get rid of a large area of hair.

Before tweezing, it is worth having a hot shower or splashing warm water over the desired area in order to open the pores of the skin and thus facilitate hair removal and reduce pain. When tweezing a hair out, pull gently in the direction of hair growth so as to reduce the risk of ingrown hairs or skin irritation.

Threading is actually one of the oldest methods of body hair removal and involves rolling twisted threads over hairlines to remove unwanted hair. It is a difficult technique that takes practitioners many months to perfect, so you likely won't be doing this alone or at home. It is inexpensive, fast and slightly uncomfortable but requires a very skilled practitioner.

Unfortunately, threading only works on flat surfaces and removes hair in straight lines, making it more suitable for the face and other small regions and unsuitable for larger or curved regions.

This form of hair removal involves spreading heated wax over the desired area and then using a strip to remove the wax and the hair along with it. This technique is effective and can last for up to four weeks. Additionally, waxing is cheap and waxing kits are readily available, allowing you to do it yourself in the comfort of your own home.

Caution must be taken however, as the pain of waxing is an inescapable truth, especially for first-timers, and while it guarantees a hairless body, it can also lead to skin irritation and ingrown hairs. To combat ingrown hairs, thoroughly exfoliate the problem area and generously moisturise to encourage the new hair to grow normally.

Sugaring, also known as Persian waxing, is a form of hair removal similar to waxing in that sugar paste is spread over the skin and then removed with a strip of cloth or paper in the opposite direction of hair growth. The majority of sugar pastes are completely natural and can be made at home.

Because the paste sticks to the hairs rather than the skin as in waxing, the process of sugaring may prove to be a less painful method of effective hair removal. Sugaring also involves less redness and skin irritation, making a more attractive method for those with sensitive skin. But, just like with waxing, ingrown hairs may occur.

Depilatories contain chemicals that react with the protein structure of hair, breaking it down to a point where it can simply be washed away. The lotion is lathered on over the unwanted hair and left to sit for up to 15 minutes before being washed off, making it an easy candidate for a shower routine.

Generally, the results last longer than using a razor - up to nearly two weeks because the chemicals in depilatories reach down into your pores and remove some of the hair underneath the skin - and have an added bonus of exfoliating your skin leaving it feeling feels softer and smoother.

They are easy to apply and are widely available over the counter; however, there is a risk of a possible allergic skin reaction to the strong chemicals and also have the downside of being messy and leaving a strong odour.

Changes are often noticed within a few weeks and continued use of hair inhibitors will keep the hairs away; sometimes even permanently. Unfortunately, hair inhibitors do not always work for everyone as every individual reacts differently.

A thin metal probe is inserted into the opening of the hair follicles and a low-level electrical current passes through the probe into your skin destroying the hair follicle and hence leaving hair unable to grow back. The process is terribly slow, taking up to 20 seconds per hair follicle, and requires several treatment sessions to completely destroy the hair follicles.

After electrolysis, your treated skin may temporarily be red, swollen, and tender. When done often and correctly, it can permanently remove unwanted hair, posing few risks. However, and in extremely rare cases, electrolysis can cause scarring and changes in skin colour of the treated areas.

Laser removal is not something you can do by yourself at home and has the additional downside of typically being expensive. The laser works by targeting the roots of the hair follicle to destroy it and, more impressively, it does so without damaging the skin. While slight discomfort may be experienced during laser removal, it is certainly less painful than waxing or sugaring and laser treatment can be undergone on virtually any area of the body and over a larger area than electrolysis.

Dermatological side effects of laser treatment, such as scarring and pigmentary changes, are extremely rare and often only temporary. Laser removal results are most effective on those with light skin and dark hairs because the contrast makes it easier to target the hairs.

Typically, three or four treatments will be needed to guarantee permanent hair removal and before undergoing treatment you will need to avoid any other type of hair removal that removes the hair cell, such as waxing, as this will leave the laser with nothing to focus on.

We live in a world where facts and fiction get blurred
In times of uncertainty you need journalism you can trust. For 14 free days, you can have access to a world of in-depth analyses, investigative journalism, top opinions and a range of features. Journalism strengthens democracy. Invest in the future today. Thereafter you will be billed R75 per month. You can cancel anytime and if you cancel within 14 days you won't be billed.
Subscribe to News24
Related Links
Hairless genitals craze sees rise in STIs
Hair removal facts
Next on Health24
Know your skin type