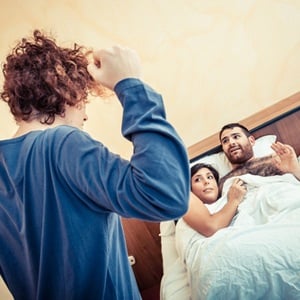 A woman may have the reputation of turning into a green-eyed monster when her man sleeps with someone else, but new research suggests a man gets even more jealous in the same scenario.

In a poll of nearly 64,000 Americans, sexual infidelity was most upsetting to men in heterosexual relationships, said study author David Frederick, an assistant professor of psychology at Chapman University in Orange, California.

"Men [in heterosexual couples] are more upset by sexual infidelity than women are," he said. "Women are more likely to be upset by emotional infidelity."

The men and women in the study, aged 18 to 65, but mostly in their late 30s, answered an online poll in 2007. Participants identified themselves as heterosexual, gay, lesbian or bisexual. All were given a "what if" scenario. They were told to imagine their partner had strayed sexually or strayed emotionally, and to tell if they would be upset.

Men in the heterosexual relationships really stood out from all the others, Frederick said, as they were the only group to be more upset by sexual infidelity than emotional betrayal.

Frederick said researchers have debated for years whether men and women differ in their reactions to infidelity.

Those who think that heterosexual men are most upset by sexual infidelity, as Frederick found, point to an evolutionary root for that rage.

Differences in men and women

According to that theory, men are more upset by sexual infidelity because they can't be sure a child their partner may later produce is theirs. Women are more upset by emotional infidelity, so the theory goes, because they would fear abandonment and loss of resources if the partner funnels them to the new love. They don't, of course, have to wonder about a child being theirs.

For all other groups, Frederick found, only about 30 percent said sexual infidelity would be most upsetting.

Ironically, according to studies cited by Frederick, about 34 percent of men, but only 24 percent of women, have engaged in extramarital sexual activity.

The study, while interesting, has some built-in limitations, said Gregory White, a professor of psychology at National University in San Diego, who has researched jealousy and written a book on the topic.

A better scenario, he said, would have been to have people report on their actual experiences while they were jealous due to infidelity, but he acknowledges that is very expensive and time-consuming. Still, the "what-if" scenario may not actually reflect how they would feel if the event actually happened, White said.

"When you ask people what they think they would do, they are drawing on all their beliefs about themselves and past experiences," he said.

How jealous a person is, White said, can be affected by early experiences. "There is a kind of jealousy one gets when you have been burned, especially in the late teens to early 20s," he said. That can be hard to shake in future relationships, White noted.

It's normal, however, for everyone to feel a twinge of jealousy now and then, especially when they wonder if their relationship is threatened or they're feeling whatever happened to trigger the jealousy is lowering their self-esteem, White said.

Image: Man with lover from Shutterstock

We live in a world where facts and fiction get blurred
In times of uncertainty you need journalism you can trust. For 14 free days, you can have access to a world of in-depth analyses, investigative journalism, top opinions and a range of features. Journalism strengthens democracy. Invest in the future today. Thereafter you will be billed R75 per month. You can cancel anytime and if you cancel within 14 days you won't be billed.
Subscribe to News24
Related Links
Do you trust your partner?
How infidelity helps nieces and nephews
Emotional infidelity
Next on Health24
Man’s penis successfully reattached after being cut off for nearly a day