Make sure there's no methanol in your mampoer 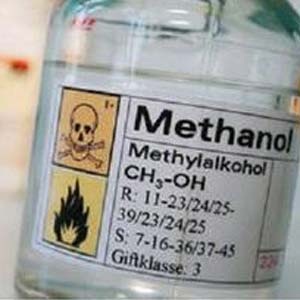 Over 100 people have died in Kenya after ingesting alcohol that contained industrial methylated spirits. Methanol, also known as wood alcohol or methyl alcohol is toxic to humans, except in very small quantities.

Methanol usually occurs naturally in very small digestible quantities in legal drinks, but in larger quantities (usually found in illegally brewed liquor) it can be a killer. Some people believe that it is the small quantity of methanol and acetone in alcoholic drinks that cause hangovers rather than the ethanol.

Read: The 6 stages of getting drunk

Methanol is a widely used industrial chemical that is found in anti-freeze, building materials, car parts, plastics and paints. Worldwide, more than 75 billion litres of methanol is produced and used in industrial setting each year.

The alcohol used in normal legally brewed and sold liquor is called ethyl alcohol orethanol. This only differs from methanol by one carbon and two hydrogen atoms, but it’s enough to cause a critical difference in the liver’s ability to metabolise it. Ethanol alcohol (in reasonable quantities) metabolises quickly into carbon dioxide and water, with which the body can cope easily. But the liver converts methanol into formaldehyde, which in turn causes a build-up of formic acid.

This quickly damages the ocular nerve, causing blindness. When taken in any significant quantities it can lead to death.

Other symptoms of methanol poisoning include drunkenness, headaches and gastric pain, vomiting, and liver failure. Symptoms take up to 12 -14 hours to manifest, whereas the symptoms of over-consumption of ethanol manifest much more quickly.

According to the National Institutes of Health, 2g of methanol is considered a safe dose, but 8g can be seriously toxic.

The reasons why home-brewers sometimes use methanol instead of ethanol can be either greed or ignorance, or both. Methanol is cheaper than ethanol, and is sometimes stolen from manufacturing plants or farm storage rooms by people who are unaware of its lethal properties. They confuse it with normal ethanol. They either drink it themselves or use it to pad out illegally brewed liquor to increase their profit margins. Producers of legally retailed alcohol often have to pay high government taxes, whereas home brewers slip through the net.

To discourage people from consuming industrial products containing normal ethanol, methanol is sometimes added. The result is known as methylated spirits. The drink is then not fit for human consumption.

Who controls alcohol production in SA?

The production of alcoholic beverages and foodstuffs is controlled in South Africa by the Department of Agriculture, Forestry and Fisheries, but it is generally accepted that much home-brewed liquor is sold in unlicensed liquor outlets. It is usually from these sources that methanol-laced alcohol finds its way onto the market. This tends to be a worldwide phenomenon.

We live in a world where facts and fiction get blurred
In times of uncertainty you need journalism you can trust. For 14 free days, you can have access to a world of in-depth analyses, investigative journalism, top opinions and a range of features. Journalism strengthens democracy. Invest in the future today. Thereafter you will be billed R75 per month. You can cancel anytime and if you cancel within 14 days you won't be billed.
Subscribe to News24
Related Links
Moderate alcohol consumption may support immunity
Impotence can be reversed by lifestyle changes
Binge drinking slows wound healing
Next on Health24
Voice-assisted tech can be a driving hazard