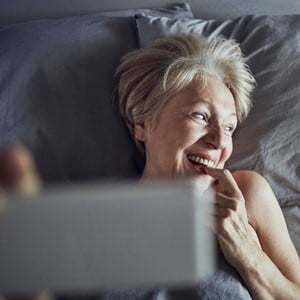 Many older men take testosterone to boost their sex drive, but new research suggests that postmenopausal women who struggle with a sagging libido might want to follow suit.

Applied topically, the hormone appears to increase women's sexual function and satisfaction, according to a new review of 36 clinical trials involving nearly 8 500 women.

"Testosterone is a female hormone and there is consistent evidence generated over decades that postmenopausal women with loss of sexual desire or arousal may benefit from treatment with testosterone," Davis said.

"Testosterone has also been shown to increase blood flow, including vaginal blood flow, so treatment may enhance orgasm and arousal by increasing blood flow to genital tissues," Davis added.

The idea of using testosterone to boost female sexuality has been around for decades, but has lain fallow since the mid-2000s, experts said.

In 2004, the US Food and Drug Administration (FDA) shot down an effort by Procter & Gamble to sell a testosterone patch for women, said Dr Andrea Dunaif, chief of endocrinology, diabetes and bone disease for the Mount Sinai Health System in New York City.

At that time, critics argued that low sex drive among women was something concocted by pharmaceutical companies to sell a product, while proponents argued that women deserved a treatment since men have Viagra, Dunaif said.

But the landscape has since changed.

In 2015, the FDA approved the oral drug Addyi (flibanserin) to treat low sexual desire in women prior to menopause, Dunaif said. And last month, the agency approved Vyleesi (bremelanotide), an injectable drug, for the same purpose.

In this new environment, Davis and her colleagues returned to the potential of testosterone therapy for women, analysing a set of clinical trials stretching between 1990 and 2018. The work was funded by the Australian National Health and Medical Research Council.

The pooled data showed that topical testosterone therapy, by gel or patch, could improve older women's sex lives by about one additional satisfying sexual encounter each month.

That might not sound like a lot, but women's health expert Dr Holly Thacker argued that it is a huge difference.

"It is a lot because if you're having sex once a week for duty sex and you don't enjoy it or want it, and then you go from having duty sex four times a month to maybe five or six times a month and really wanting it, that's a big difference in the field of women's health," said Thacker, director of the Cleveland Clinic's Center for Specialized Women's Health.

According to Davis, "Testosterone improves multiple dimensions of sexual well-being in postmenopausal women who have low sexual well-being and are distressed by this, after exclusion of other major factors, such as major depression, primary relationship issues and so forth."

Kavaler hopes this new study will "legitimise" both testosterone therapy and the whole field of sexual medicine for women.

Testosterone therapy can come with side effects for women, including acne and hair growth, the researchers found.

There are some concerns that testosterone could cause the sort of long-term health problems found in men, like increased risk of heart disease, Dunaif said. Also, women's bodies convert testosterone into oestrogen, which might boost oestrogen levels and influence risk of breast cancer.

But Kavaler noted that testosterone used to treat women comes at a tenth of the dose needed for men.

"The risks are lower because we use so much less in women," Kavaler said. "The doses are much, much higher in men."

"I think it's a shame we didn't get the patch when we could have had it a decade ago," Thacker said. "I would hope this work might stimulate someone to bring the patch to market for women."

The new analysis was published online in The Lancet Diabetes & Endocrinology journal.