Kids of obese moms have elevated risk of ADHD 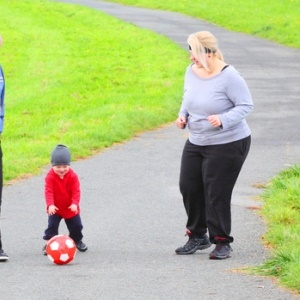 Obese mother and child from Shutterstock

Six-year-olds whose mothers were severely obese before pregnancy are more likely to have developmental or emotional problems than kids of healthy-weight moms, according to a new study.

The researchers had found evidence of this link in two previous studies, said lead author Heejoo Jo of the Centres for Disease Control and Prevention in Atlanta, Georgia.

"We wanted to see if we would find the same association using a variety of different measures," Jo told Reuters Health by phone.

"We did find pretty large associations, much bigger than we thought," she said.

Jo and her co-authors studied data on 1,311 mother-child pairs collected between 2005 and 2012, including the mothers' body mass index (BMI, a height-to-weight ratio) before pregnancy and their reports of the children's psychosocial difficulties at age six.

Kids of moms who were severely obese, with a BMI greater than 35, were twice as likely to have emotional symptoms, problems with peers and total psychosocial difficulties compared to kids of moms who had a healthy BMI, between 18.5 and 25.

More likely to have ADHD

"We already do know that obesity is related to health problems during pregnancy and throughout the lifetime," Jo said.

"I think this adds to that by suggesting that not only does severe obesity affect a woman's health but the health of her future children."

It was particularly surprising that many of the children of severely obese mothers were of average body weight at age six, said Jed Friedman of the reproductive sciences faculty of the Graduate School of the University of Colorado Denver.

"Maternal diet during pregnancy and lactation plays a very significant role in childhood outcomes," Friedman, who wasn't part of the study, told Reuters Health by email.

No measurements of diet

"The authors did not include any measurements of diet, although they did adjust for maternal weight gain, gestational diabetes, and breast-feeding."

This study could not analyse the mechanism linking severe obesity and later risk for developmental problems, Jo noted.

"One theory that we could not look at and needs further research was some small studies have linked maternal obesity to increased inflammation, which might affect foetal brain development," she said.

Women should receive comprehensive care and discuss all health and medical issues with their doctors before becoming pregnant, and that includes weight status, Jo said.

"Pre-gestational weight loss is recommended for severely obese women," Friedman said. The healthier a woman can be entering pregnancy, the better, he said.

The American Academy of Paediatrics recommends that all children be screened for developmental delay or disability at nine, 18 and 24 or 30 months of age, and women who were severely obese before pregnancy should be especially committed to getting those screens done, she said.

"And if they have any concerns, bring the child in immediately," she said.

Higher altitude US states have fewer kids with ADHD

We live in a world where facts and fiction get blurred
In times of uncertainty you need journalism you can trust. For 14 free days, you can have access to a world of in-depth analyses, investigative journalism, top opinions and a range of features. Journalism strengthens democracy. Invest in the future today. Thereafter you will be billed R75 per month. You can cancel anytime and if you cancel within 14 days you won't be billed.
Subscribe to News24
Next on Health24
Fish consumption lowers ADHD symptoms