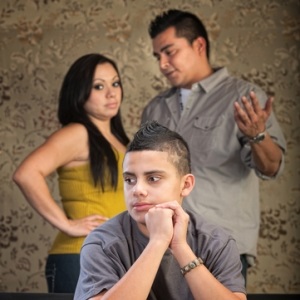 Boy with concerned parents from Shutterstock

Among people who use illicit drugs, those with attention-deficit/hyperactivity disorder (ADHD) start using them one to two years earlier in their youth than those without the disorder, a new study finds.

The findings show the need to begin substance use prevention programmes at an earlier age among teens with ADHD, the University of Florida researchers said.

"The take-home message of this study shouldn't be that children with ADHD are more likely to become drug users. Rather, seemingly 'normal' teenage behaviour, such as experimenting with tobacco or alcohol use, may occur at younger ages for individuals with ADHD," lead author Eugene Dunne, a doctoral student in clinical and health psychology, said in a university news release.

In the study, Dunne's team looked at questionnaires completed by more than 900 adults who had used illicit drugs in the past six months. Of those, 13 percent said they had been diagnosed with ADHD.

While the study could point to an association between ADHD and earlier-onset substance abuse, it could not prove cause and effect.

Still, Dunne said the pattern of abuse fit the typical "gateway" theory of substance abuse, "with alcohol being the first reported, followed very closely by cigarettes, then leading to marijuana and eventually more illicit drugs such as cocaine and heroin."

"Our study also found that current risk behaviours for HIV, such as injection drug use and needle-sharing, were associated with ADHD history, so perhaps impulsivity and other ADHD symptoms might continue to be a factor in adult decision-making," he added.

People with ADHD who use illicit drugs may be trying to self-medicate some of the symptoms of their disorder, some experts believe.

One expert agreed with that notion.

"A good number of these ADHD patients also suffer from anxiety symptoms for which substances like alcohol and other depressants help them with their anxiety symptoms and transiently elevate their mood," said Dr. Jatinder Chawla, child and adult psychiatrist at Winthrop-University Hospital in Mineola, New York.

Another expert cautioned, however, that the study in no way means that children with ADHD are destined for substance abuse.

"The findings from this study may alarm and frighten parents of children or teens with ADHD," said Dr. Andrew Adesman, chief of developmental and behavioural paediatrics at Cohen Children's Medical Centre of New York, in New Hyde Park, New York.

However, he added that "no information was provided in the study about the type of ADHD that these individuals reportedly had, or whether they ever received effective treatment."

Both of those factors may influence "risks and patterns for later drug use," Adesman said.

The study was published in a recent issue of the journal Addictive Behaviours.

ADHD in adults?
ADHD in the classroom
The ABC of ADHD

We live in a world where facts and fiction get blurred
In times of uncertainty you need journalism you can trust. For only R75 per month, you have access to a world of in-depth analyses, investigative journalism, top opinions and a range of features. Journalism strengthens democracy. Invest in the future today.
Subscribe to News24
Next on Health24
ADHD: Peter's story