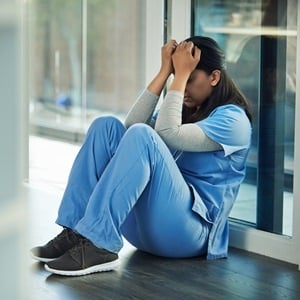 Nurses have to deal with a lot of stress on a daily basis.

A UK-based finger-prick blood test tested 400 nurses for the most common type of anaemia at this year’s Royal College of Nursing congress (RCN), reports the Nursing Times. The results indicate that 15–20% were found to have iron deficiency anaemia, without being aware of the fact. This prevalence rate is higher than in the rest of the male and female population, with the exception of pregnant women.

The test was led by Professor Toby Richards and his research team from University College London in Liverpool in May 2019.

Richards and his team also asked RCN members to fill out a questionnaire to find out the possible causes of their anaemia. These included:

Richards raised the point that women are more likely to be anaemic, and that one should consider that the profession is female-dominated. Nurses were also likely to be blood donors, with 20% of donors being in the healthcare industry.

Having a high anaemia rate among nurses might negatively impact on their performance at work, said Richards. “That’s one in six to eight nurses potentially under-performing while being the population that should be advising others,” he added. The team told Nursing Times that the results are concerning, especially when considering that nurses are already performing under a great deal of pressure.

Following these findings, Richards said that more needed to be done to educate nurses about the condition, especially because they are the ones giving medical and health advice to the general public.

Although no tests to determine the iron deficiency levels among South African nurses have been carried out, last year there were reports of the profession experiencing critical staff shortages, leading to nurses being overworked, particularly at public health facilities. This was in spite of thousands of nurses being unemployed.

Short-staffed hospitals and the appalling conditions they work under leave nurses feeling frustrated and “sick and tired”. One nurse told IOL that four nurses often had to attend to 100 patients. The Citizen reported that an estimated 18% of South African Nursing Council (SANC)-registered nurses aren't practising due to poor working conditions, while some work two jobs in both the public and private sector, so that they can make ends meet.

Since iron deficiency anaemia has a significant impact on lifelong health, if it is found that a high percentage of South African nurses also have the condition, raising awareness and taking steps to ensure nurses aren't overworked is crucial to ensuring maximum productivity.

We live in a world where facts and fiction get blurred
In times of uncertainty you need journalism you can trust. For 14 free days, you can have access to a world of in-depth analyses, investigative journalism, top opinions and a range of features. Journalism strengthens democracy. Invest in the future today. Thereafter you will be billed R75 per month. You can cancel anytime and if you cancel within 14 days you won't be billed.
Subscribe to News24
Next on Health24
Sickle cell disease: How much do you know about this 'silent killer'?

Get the newsletter
Voting Booth
Have you entered our Health of the Nation survey?
Please select an option Oops! Something went wrong, please try again later.
Yes
27% - 9958 votes
No
73% - 26340 votes
Previous Results