A 29-year-old man from America has been making headlines all over the world after sharing graphic photos of what his hand looks like after a surgical procedure to correct defects caused by a combination of arthritic conditions.

29-year-old Dietrich Sölter from Seattle has been battling with debilitating rheumatoid arthritis, lupus, psoriatic arthritis, pustular arthritis and connective tissue disease for the last eight years. He recently started a Go Fund Me account where he has been raising money to cover the cost of the corrective surgery he urgently needs.

His crippling combination of conditions has taken a severe toll on his body and causes him to be in constant pain. The effects of the conditions are most evident in his hands and fingers. He explains that he suffers from a condition known as boutonniere deformity that is affecting both his hands. As a result of this, Dietrich can barely use his fingers – a major disability for anyone, but especially for him as he is currently studying towards a career in IT and computer repairs.

"The fingers are the most painful part of my body and feel as if someone is relentlessly pounding away at them with a hammer." 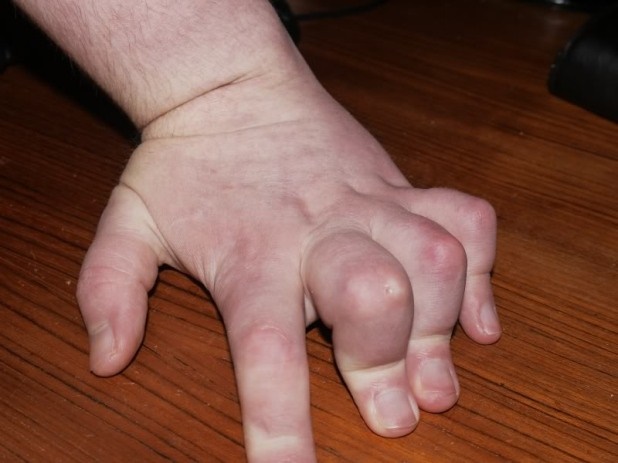 How Dietrich's fingers looked prior to surgery (Image courtesy of Go Fund Me).

Earlier this week, Dietrich underwent a special surgical procedure to fix the damage to the fingers on his left hand and give him better use of the hand. He found a surgeon who was willing to use a device known as Digit Widgets that will slowly straighten Dietrich's fingers over time. The procedure, coupled with physical therapy should over time give him much greater use of his fingers and hands.

A friend of Dietrich's posted a series of extremely graphic photos of what Dietrich's hand looks like after surgery on the social sharing site Reddit. The shocking pictures show the devastating effect that rheumatoid arthritis and related conditions can have on the body. Dietrich's hand during surgery to insert the Digit Widgets that will straighten out his fingers (Image courtesy of Reddit). An X-ray showing how the Digit Widgets are inserted into Dietrich's fingers (image courtesy of Reddit).

Dietrich has successfully had the Digit Widgets inserted into his fingers in his left hand and is now hoping to raise the funds to have the same procedure performed on his right hand. Unfortunately his medical insurance will only cover 40% of the cost of the operation, so there is a shortfall of $6 500 that Dietrich will have pay himself. If you can help out in any way by donating some money, head over to his Go Fund Me profile.

Rheumatoid arthritis is a chronic, autoimmune disease that causes inflammation of the peripheral joints. It most commonly affects the hands, wrists, elbows, shoulders, hips, knees and feet. According to the South African Orthopaedic Journal, there is limited data on rheumatoid arthritis in South Africa, but it is believed that the condition affects approximately 1% of the population in developing countries.

We live in a world where facts and fiction get blurred
In times of uncertainty you need journalism you can trust. For only R75 per month, you have access to a world of in-depth analyses, investigative journalism, top opinions and a range of features. Journalism strengthens democracy. Invest in the future today.
Subscribe to News24
Related Links
Can the Pill relieve rheumatoid arthritis symptoms?
Knee replacement for those with rheumatoid arthritis
Depression in rheumatoid arthritis sufferers higher than previously thought
Next on Health24
Got arthritis? Your job might be the problem...