'I am here!' Silenced by autism, a young man finds his voice 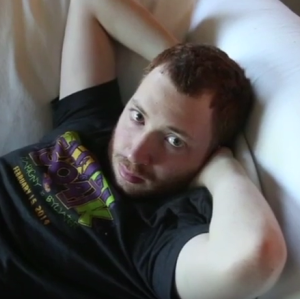 Though he cannot speak, Benjamin Alexander has much to say, one typed word at a time.

Ben was diagnosed with nonverbal autism and epilepsy a few months before his third birthday. Now 22, he is a writer and a student at Tulane University in New Orleans with a GPA of 3.7.

In his essays, he returns repeatedly to the "fiend" that tried to silence him, the condition he sarcastically calls his "gift".

"Who in the hell gave me this gift?" he wrote in one piece published in a local online journal. "Please, take it back."

Ben wants to help educate people about autism and challenge stereotypes. That's not easy because he still needs some assistance using a computer to communicate, and that's caused some to doubt him over the years.

On a recent evening, Ben's father settles him at the keyboard and rests his hand under his son's arm. He lightly squeezes Ben's forearm, a subtle move that sets him into action. Ben begins to punch the keys with one finger.

"I . am . not . stupid . as . some . people . used . to . think," Ben types. He unwraps his arm from his dad's and hits the period by himself, causing the computer to read each word in a robotic voice that he doesn't really like, but needs.

Later he adds, "I want people to know I am here."

As the sun rises over the leafy streets of suburban New Orleans, Ellen Schneider enters her son's room, adorned to the ceiling with tributes to his beloved New Orleans Saints football team, and rouses him for his day on campus.

"Come on, B-man." She leads him to the bathroom to use an electric toothbrush. "Oooh, you're gorgeous," she says, as she looks into his wide hazel eyes and wipes his bearded face with a towel.

This morning, Ben is calm, having taken his medication – pills for everything from epileptic seizures to anxiety. He eats sliced apples and bread for breakfast while laughing to himself or babbling: "Aw aw, mm mm, bip bip." The soft sounds seem involuntary in some moments, self-soothing in others.

This daily existence, with its many ups and downs, has tested the resolve of his success-minded parents, both age 55. His mother is an ophthalmologist, his father an obstetrician. They also have two daughters, Hillary, 25, and Lexi, 15.

"We cure things with our hands. We cut it out. If it's something that needs to be removed, we remove it," his dad, Sam Alexander, says. "But with Ben's condition, we couldn't do that."

Spinning around and around

When Ben was born, there was no indication that anything was wrong. Family videos show a smiley, chubby-cheeked boy with curly red hair just beginning to form words. "Hello," he seems to utter in one video, after picking up an old telephone receiver.

In the months that followed, however, Ben lost those first few words. He stopped looking people in the eye. His parents often would find him off in a corner spinning around and around.

Doctors initially told them to be patient, that it wasn't unusual for some kids to have delayed speech. But then, when Ben was about 2½, came the diagnosis they feared: autism. Often called pervasive developmental disorder, it was accompanied by epileptic episodes, which worsened in adolescence.

Though advised to keep their expectations low, his parents took him from specialist to specialist, to Miami, Boston and Chicago, and tried any number of recommended therapies.

In his writing, Ben recalls how the doctor in blue jeans and Birkenstocks encouraged him: "It does not matter how fast you get there, so long as you get there."

Early on in their battle with autism, Ben's parents heard that a nonverbal boy in India was writing poetry about his condition, and they wondered: What if Ben could communicate that way? So they tried facilitated communication, a controversial method where another person supports the typing hand of a nonverbal autistic person to help him "speak" using a computer.

"Who is the president of the United States?"

"G-e-o-r-g-e-w-b-u-s-h," Ben typed on a portable keyboard, according to his father, who supported his typing hand.

These days, dad often only needs to hold Ben's forearm loosely when he types, or he places his flat hand atop his son's wrist to steady him in moments of higher anxiety.

For some reason, his parents say, human touch and verbal prompting help bridge the connection between what Ben's brain wants to do, and the actual execution. When typing, he appears to be directing his own finger to particular keys. His eyes alternate from keys to screen. He often sees and fixes his mistakes, though his parents also point out errors.

Because Ben needed more physical support early on, some people didn't believe he was typing his own thoughts. His parents say they included the administrators at the private school he attended. So he switched to a public school, where special education teacher Judy Nodurft took on his case.

She, too, had doubts initially. She'd heard of cases where well-meaning parents directed their children's typing, an oft-repeated criticism of facilitated communication. Nodurft received training for supported typing at an institute at Syracuse University in New York and, after working with Ben, became a believer.

"You were hard," Ben typed recently when Nodurft visited his home. She chuckled.

By the time Ben was 9, he wrote an essay – "My Adventure in Life" – that won a state writing honour. It was compiled from his answers to his mom's questions about what his autism felt like.

In simple words – and with mom telling him what didn't make sense or pointing out spelling and punctuation errors – Ben told readers how he needed to be by himself to think and how looking into her eyes was often difficult for him, even "painful".

Even so, he wrote, "I can not wait to start living."

Today, Ben is living the life of a college student. In his classes at Tulane, he sits with his dad at his side, often in a back corner with easy access to an exit. Sometimes, his father places his hand over Ben's mouth to quiet him, or nudges him to participate in a discussion. Ben clicks his laptop mouse so the computer voice announces "Speak" when he has a question or comment, his way of raising his hand.

During a screenwriting class this semester, he contributes to a discussion on the movie "The Social Network".

"I loved it because I found it ironic that a guy who was socially inept started a social network," Ben says through his laptop voice, as the instructor nods in agreement.

Not a freak or a fraud

Dr Paul Lipkin, director of the Interactive Autism Network at the Kennedy Krieger Institute in Baltimore, says as few as 10 percent of people on the autism spectrum have no real language, and most of those tend to have low intellectual abilities.

Though many experts point to studies debunking facilitated communication, Lipkin is less sceptical, even if Ben seems "really rare".

"As physicians," he says, "we never say never."

Ben is the first person with nonverbal autism to attend Tulane, and administrators and professors say they've never had reason to doubt his abilities. The university's accessibility office arranged meetings to introduce Ben and his father to each new professor. But assistant director Shawna Foose, who's gotten to know Ben well, says that's about it.

"He doesn't want to be seen as a freak or a fraud," she says.

Thomas Beller, an associate professor of creative writing who's had Ben in class, says he, too, quickly bypassed the "exoticism" of Ben's condition to judge him on the merits of his work.

"I don't want to grade him on a curve as the autistic guy," Beller says.

Writing takes Ben many hours. He uses predictive word processing software that allows him to choose from a list of words after typing a few letters. Sometimes he writes fiction, such as a short story set at the time of Hurricane Katrina, and he is talking about a novel. Essays are his favourite form, though.

This year, at his father's suggestion, Ben wrote about a remarkable meeting – and a transformative conversation. Using his voice simulator, he spoke to one of his heroes, Steve Gleason, a former Saints player who now has amyotrophic lateral sclerosis, or ALS, and also speaks with the help of a computer.

The conversation turned serious when Ben shared his anger, asking: "Can you tell me how you stay so positive? How do you deal with frustration? How do you make your computer scream?"

Gleason replied that he'd found purpose by helping others with a foundation he and his wife formed.

He also assured Ben that it was normal to question the meaning of his life. Ben was amazed.

"I have only dreamed about being normal," he wrote in the piece, published on Tulane's news site.

Gleason also told Ben that he could be an example for other people with autism. Ben, in his interview, says he knows that's true.

"I am not the autism poster boy. But I hope that people will ... allow us to be heard."

We live in a world where facts and fiction get blurred
In times of uncertainty you need journalism you can trust. For 14 free days, you can have access to a world of in-depth analyses, investigative journalism, top opinions and a range of features. Journalism strengthens democracy. Invest in the future today. Thereafter you will be billed R75 per month. You can cancel anytime and if you cancel within 14 days you won't be billed.
Subscribe to News24
Next on Health24
Autistic kids find human voice unpleasant