What is the Alexander Technique and what could it do for you? 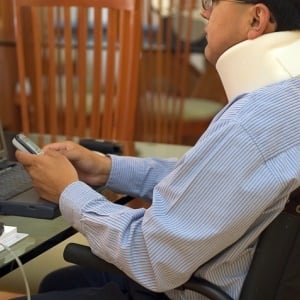 How could the Alexander Technique help you unlearn bad habits, like poor posture?

The Alexander Technique has been used for more than 100 years to improve performance, posture and other body mechanics, yet it's arguably the least well known method for achieving these benefits.

Though some people call it a form of bodywork, practitioners describe it as an educational method, because it teaches you to recognise and then unlearn negative habits, like bad posture and tensing muscles in reaction to stress.

The Alexander Technique shows you how to do everyday activities with less effort and greater ease.

Business people can benefit by using it to improve vocal projection and voice quality when making presentations.

The self-named technique was developed by actor Frederick Matthias Alexander, who was plagued by chronic hoarseness that doctors couldn't explain.

Thinking that the problem could be related to how he was using his voice, he identified habits that were indeed causing it and then how to undo them.

Though the number of lessons you'll want to take varies based on your needs, one study on back pain, published in the BMJ, found that just six one-on-one lessons with an Alexander Technique teacher followed by a home plan was effective.

Those who are interested in the technique will need to look for a teacher specifically certified by the American Society for the Alexander Technique. These qualified teachers have completed at least 1 600 hours of training over a minimum of three years in an approved training programme.

We live in a world where facts and fiction get blurred
In times of uncertainty you need journalism you can trust. For only R75 per month, you have access to a world of in-depth analyses, investigative journalism, top opinions and a range of features. Journalism strengthens democracy. Invest in the future today.
Subscribe to News24
Related Links
'Getting to grips with my emotional eating habit made me lose 28kgs – and now I'm a personal...
Why quitting smoking makes more 'cents'
'Smartphone slouching' more serious than it sounds
Next on Health24
'Smartphone slouching' more serious than it sounds