Meat and cancer – making sense of the evidence 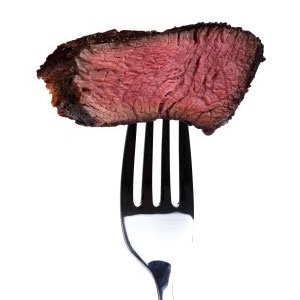 Last week the World Health Organisation’s cancer arm, the International Agency for Research on Cancer (IARC), announced that the consumption of processed and red meat is associated with an increased risk for colorectal cancer.

Professor Vikash Sewram, the Director of the African Cancer Institute at Stellenbosch University’s Faculty of Medicine and Health Sciences, who also chairs the South African Ministerial Advisory Committee on the Prevention and Control of Cancer, answers some tough questions about this important announcement.

Who made the evaluation?

The assessment was part of the IARC’s Monographs Programme that has been involved since 1971 in evaluation of carcinogenic risks to humans – whether it be exposure to chemicals, complex mixtures, biological agents, occupational exposures or lifestyle factors.

Close to 1,000 agents have been evaluated in order to identify the potential risks to human health that exist in the environment.

The evaluation of a risk factor takes place over a period of time and entails interdisciplinary working groups of expert scientists, selected from all over the world, reviewing published studies and evaluating the weight of the evidence that an agent can increase the risk of cancer.

A meeting is convened to deliberate the results of the evaluation based on the evidence at hand.

The process is extremely rigorous and representatives from national agencies as well as industry observers sit in discussions to ensure that the evaluation process is robust, fair and without any conflicts of interest.

What does the evidence show?

A working group of 22 experts from 10 countries evaluated the evidence from 800 studies and found that processed meat is carcinogenic to humans (Group 1), as there is sufficient evidence from epidemiological and mechanistic studies from around the world that show processed meat consumption causes colorectal cancer.

Red meat consumption was classified as probably carcinogenic to humans (Group 2A) based on limited epidemiological evidence in humans, although there was strong evidence to support mechanistic events leading to cancer.

A statistically significant dose–response relationship was found where for each 50 gram portion of processed meat eaten per day, the risk of developing cancer increased by 18%.

However the risk following a 100 gram portion intake of red meat per day increased by 17%.

However, it is important to note that all of these agents, whilst in the same group, do not all share the same level of hazard.

Read: Too much red meat may shorten your life

For example, the risk of developing cancer as a result of smoking or being exposed to second-hand tobacco smoke is many orders of magnitude higher than that associated with eating red meat.

Why is there a link between meat intake and cancer?

The risk of developing cancer arises from chemicals that are produced by processing the meats and from cooking.

For example, cooking at high temperatures or placing meat in direct contact with a flame can produce certain types of chemicals that can damage the DNA.

These chemicals are known as carcinogens. A few possible explanations for the link with processed foods are as follows:

1.    Preservatives contain chemicals, known as nitrates, that are added to some processed meats and have been shown in some studies to produce N-nitrosamines during cooking – molecules that cause cancer.

2.    The smoking process leads to the meat being contaminated with carcinogenic chemicals from the smoke itself, known as polycyclic aromatic hydrocarbons (PAHs).

3.    When meat is cooked at high heat, PAHs and other carcinogenic chemicals known as heterocyclic aromatic amines (HAA), are formed and these chemicals damage DNA. Pan-frying, grilling or barbecuing produces the highest amounts of these chemicals.

Should I stop eating meat?

The decision to stop eating meat is a personal choice.

Meat is a good source for protein, contains all the essential amino acids, is rich in iron, zinc, and selenium and contains vitamins A, B and D. Conversely, processed and red meat is relatively high in saturated fat and cholesterol, which are linked to increased risk of heart disease.

Consumers are advised to moderate their meat intake. Regularly eating large portions of red and processed meat over a long period of time is not advisable.

A balanced diet combined with fruits, vegetables and fibre and regular exercising is the goal for a healthy life.

The top priorities for the prevention of cancer and other non-communicable diseases remain smoking cessation, reduction of alcohol intake, maintenance of normal body weight and balanced nutrition.

The latest data from the National Cancer Registry reveals that prostate cancer remains high on the list of cancers, with an incidence rate of 29.90 per 100 000. One in 27 males will develop prostate cancer in their lifetime.

Colorectal cancer features much lower with an incidence rate of 7.55 and 4.77 per 100 000 in males and females respectively.

This translates to one in 114 males and one in 182 females developing colorectal cancer in their lifetime.

Reducing meat intake is just one way of minimising risk. While primary prevention continues to be advocated, early detection remains the mainstay for successful treatment and outcomes.

Have a cancer-free braai

Lifestyle and diet as causal factors of cancer

We live in a world where facts and fiction get blurred
In times of uncertainty you need journalism you can trust. For 14 free days, you can have access to a world of in-depth analyses, investigative journalism, top opinions and a range of features. Journalism strengthens democracy. Invest in the future today. Thereafter you will be billed R75 per month. You can cancel anytime and if you cancel within 14 days you won't be billed.
Subscribe to News24
Related Links
Too much biltong, sausages and bacon causes cancer
Braai-mad South Africans take meat warning with a pinch of salt
Healthy grilling tips for braais
Next on Health24
INFOGRAPHIC | The forgotten cancers you should know about