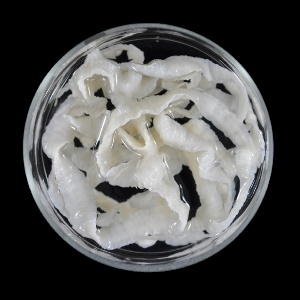 Cancer cells transmitted from a common tapeworm appear to have caused cancer-like tumours in a Colombian man with HIV the first known case of what's called "malignant transformation", U.S. health officials are reporting.

The parasite known as Hymenolepis nana, or the dwarf tapeworm  is the most common human tapeworm worldwide, particularly in developing nations.

At any given time, up to 75 million people carry it, according to the U.S. Centres for Disease Control and Prevention.

People can become infected with dwarf tapeworm eggs when they eat food contaminated with mouse droppings or insects, or ingest faecal matter from people carrying the parasite.

Usually, the invasion causes no symptoms, but in some people, the dwarf tapeworm can continue to reproduce itself in the intestines, according to the case report.

In the case of the man with HIV, CDC scientists suspect that his weakened immune system allowed the dwarf tapeworm to thrive unchecked.

From there, mutations may have accumulated in some tapeworm cells – essentially causing cancer in the parasite – and those cells eventually caused cancer-like tumours in their human host.

That, at least, is the theory, according to Dr Atis Muehlenbachs, one of the CDC researchers who reported on the case in the New England Journal of Medicine.

"There's still a lot we'd like to learn," Muehlenbachs said.

The story began back in 2013, when doctors in Colombia asked the CDC for help with a puzzling case.

A 41-year-old man with HIV had come to them suffering from fatigue weight loss, fever and coughing. CT scans revealed growths in his lungs, liver and adrenal glands.

But biopsies from the man's lung tumours showed something bizarre: The tumours were cancer-like, but the cells were tiny.

"They were way too small to be human," Muehlenbachs said. "They were actually about 10 times smaller than a human cancer cell."

The tumour cells also seemed to be fusing together, the researchers found – a behaviour not normally seen in human cells.

Ultimately, after a nearly three-month search for the root of the man's illness, the CDC team found dwarf-tapeworm DNA in the patient's tumour cells. Three days later, the man was dead. The tumours didn't directly cause his death (kidney failure did), but they did contribute to his decline, Muehlenbachs said.

It's not clear how or why the tapeworm cells became malignant and ultimately caused tumours in their human host, Muehlenbachs noted.

"We'd also like to know how common this is," he said. "We think it's rare, but we don't know how rare." A severely compromised immune system is probably necessary to set the stage, according to Muehlenbachs: The patient in this case had not been taking medication to suppress his HIV infection, and he had very low numbers of infection-fighting T cells.

But since both HIV and dwarf-tapeworm infection are common in the developing world, the case raises concerns, the CDC team said: Similar cases, if they do occur, could be misdiagnosed as human cancer.

A red flag, Muehlenbachs said, would be tumour cells that seem impossibly tiny.

And how should doctors treat tapeworm-derived tumours? No one knows, Muehlenbachs said, but conventional cancer treatments might work.

The case is unique in that cancerous cells appear to have been transmitted from the tapeworm itself. But researchers have long known that some chronic infections, including certain parasites, can raise the risk of human cancers.

And that's how this case ties into a larger picture, said Dr Len Lichtenfeld, deputy chief medical officer for the American Cancer Society (ACS), in Atlanta.

"We know that infections can cause cancer," Lichtenfeld said. "Hepatitis B and C can lead to liver cancer, HPV (human papillomavirus) can cause cervical cancer."

There are even some parasitic infections that have been linked to an increased risk of developing cancers of the bladder and bile ducts, according to the ACS.

Researchers don't know the precise mechanisms behind those infection-cancer links, though.

"The elegance of the science they used in this case is impressive," Lichtenfeld said. "The tools they used to get answers weren't available just a few years ago."

The achievement, according to Lichtenfeld, raises the possibility that those same tools could be used to better understand the relationship between various infections and cancer.

On a more everyday level, Muehlenbachs said, the case underscores the importance of avoiding dwarf tapeworm infection. For the typical American, he said, that means being careful about hand-washing and consuming safe water and food when traveling to countries where the parasite is widespread.

Tape worm seizures on the rise

Is sushi okay in pregnancy