10 things you didn’t know about poop 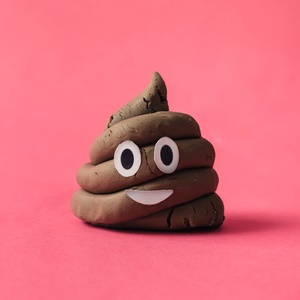 A healthy bowel movement should be brown.

Poop is not something you discuss in polite conversation – however, it can reveal many things about your health.

So, whether you regard this as toilet trivia or useful information to help you navigate your digestive health is up to you.

1. Your poop is basically water

While your stool certainly doesn't look like it, it’s almost 75% water. The rest of what you see is made up of dead bacteria (they produce the various compounds and gases that cause the smell), undigested fibre, waste material from your stomach, fats, salts and other substances from the intestines and liver. The ratio of these substances differs from person to person.

2. Your poop should be brown

The brown colour of a healthy stool is usually caused by dead red blood cells and bile. Both of these substances contain a chemical called stercobolin. Experts reckon healthy poop should be a chocolate-brown. The colour may, however, vary, giving clues about your digestive system. Green poop could signal that you ate something containing chlorophyll, the pigment that gives plants and vegetables their green colour, or bile, which could signal an infection. Yellow poop could indicate excess fat in the liver, while dark black poop could be caused by blood or an iron supplement.

3. Not all blood in poop is bad

4. You don't need to poop every day

While everyone poos, there is a slight difference in the way the gastrointestinal tracts of men and women work. This is because of the anatomical differences between men and women. Women have wider pelvises as well as extra organs such as the uterus and ovaries. This causes their colons to be situated lower than men's. This makes it more challenging for women to pass stool, and that is why constipation is generally more prevalent in women.

6. We are not pooping correctly

Research indicates that, because of the anatomy of our intestines, it’s not optimal for us to sit on a toilet, and that we should squat instead. However, sitting on the toilet has been ingrained in us. So what’s the solution?

A simple potty stool under your feet might help cure constipation, researchers say.

"These toilet stools have become popular through things like viral videos and social media, but there is really no medical evidence to show whether or not they are effective," says researcher Dr Peter Stanich, an assistant professor of gastroenterology, hepatology and nutrition at Ohio State University.

7. We evolved to find poop disgusting

We know now that the foul smell of excrement is caused by bacteria. But the overall texture and our general aversion to poop stems from a biological function that helps keep us safe from infection and disease. We evolved this way to encourage us to stay away from poop and thereby avoid germs.

8. Your poop is precious

A fun fact is that each human poop contains a significant amount of precious metals. According to a presentation at the 249th National Meeting & Exposition of the American Chemical Society, human waste contains metals such as gold and silver, as well as elements such as palladium and vanadium, used in the manufacturing of electronic equipment.

9. Coffee can help you poop

Coffee can make the end of your intestine contract like you need to have a bowel movement, even when you have no intention to go. A study in the journal Gut found that caffeine induces a gastrocolonic response and produces a hormone that stimulates movement in the colon.

10. Constipation can last for decades

Imagine being constipated for 22 years – this is what a 22-year old Chinese man had to endure until 76cm of his colon was removed. This section of his colon weighed about 13kg and was impacted with faeces that had accumulated since his birth. This was caused by a birth defect called Hirschsprung's disease, a condition that affects one in every 5 000 live births.

We live in a world where facts and fiction get blurred
In times of uncertainty you need journalism you can trust. For 14 free days, you can have access to a world of in-depth analyses, investigative journalism, top opinions and a range of features. Journalism strengthens democracy. Invest in the future today. Thereafter you will be billed R75 per month. You can cancel anytime and if you cancel within 14 days you won't be billed.
Subscribe to News24
Related Links
This is what can happen when constipation gets serious
Yes, you can eat too much fibre
How to get your bowels back on track after the holidays
Next on Health24
6 possible causes of chronic constipation