Back in the day any quack could create a cough remedy and sell it to an unsuspecting public. There were no rules and regulations on what ingredients you could use, and there certainly wasn't an 'advertising standards authority'.

That meant that all manner of dubious ingredients where thrown together and sold as the ultimate cure for your cough.

For instance, did you know that Bayer Pharmaceuticals sold heroin as an over-the-counter remedy for coughs in the early 1900s?

By 1898, Bayer pharmaceutical found that, by boiling morphine for several hours, they could create diacetylmorphine, which they then called Heroin. It was said to cure bronchitis, tuberculosis and other cough-related diseases and in 1906 it was approved by the American Medical Association for general use and to replace morphine (which was until then the cough cure of choice). Heroin wasn't the only ingredient in dubious cough and cold remedies. Here are a couple more gems:

2. The infamous One Night Cough Syrup that is nothing more than a lethal cocktail of drugs.  Manufactured in Baltimore in the US (1988). 3. A strange mixture of alcohol, cannabis and chloroform was said to cure colds and coughs by the Tancro Dug Company (1814). 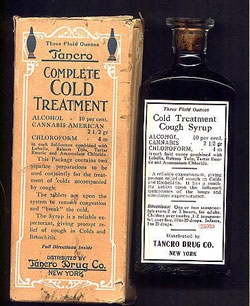 4a. Dr Veno's Lighting Cough Cure (1920) was hailed as a miracle cure, although the exact ingredients remain a mystery. Today it's sold as Beecham’s Veno’s Expectorant (see below). 5. Dangerous advice: Dr Batty's asthma cigarettes (1890) not only 'cured' asthma, but a host of other diseases too. 6. Ayers Cherry Pectoral (1891) - depending on which list of contents you reference, this cure for colds, coughs and “all diseases of the throat and lungs” contained either morphine or heroin. 9. Charles E Hires' cough cure (ca 1870) was said to instantly dissolve and loosen the mucus. Made from fresh balsem, roots, herbs and bark. We live in a world where facts and fiction get blurred
In times of uncertainty you need journalism you can trust. For 14 free days, you can have access to a world of in-depth analyses, investigative journalism, top opinions and a range of features. Journalism strengthens democracy. Invest in the future today. Thereafter you will be billed R75 per month. You can cancel anytime and if you cancel within 14 days you won't be billed.
Subscribe to News24
Related Links
Yes, there is a 'right way' to cough and here's how
Why do you cough after exercise?
What should you do about that persistent cough?
Next on Health24
Why SA continues selling 'most abused over-the-counter drug'